For some time I'e been thinking about building a harp trap for my own use and I'm delighted to say that this winter I have finally found the time to do so. What is a harp trap? Also called a Tuttle trap (after Merlin Tuttle, whose invention it is), it's an ingenious trap which catches bats in flight, without harming them.
It works like this: a bat flies towards the trap and recognises a harp-like collection of vertical nylon lines about 2.5cm apart. With great agility it successfully flies between the lines, but what it doesn't expect is a second set of lines offset from the first, so that it can't avoid hitting them. It then slides unharmed down the lines, into a canvas bag below. The bat will try to climb the side of the bag, so it can take off again, but the sides of the bag are lined with thick, slippery polythene. The bat can climb the canvas, but soon reaches the seam where it is joined to the polythene and can go no further until it's removed.
Harp traps can be marvellously effective, when used properly. They are particularly good at trapping bats leaving roosts, as the bats have less time to see and avoid the trap than they would if they were free flying. More importantly, the bats are entirely unharmed and in my view suffer less stress than if caught in a mist-net. The problem is the cost: a single harp trap costs upwards of £800. See http://www.faunatech.com.au/products/harptrap.html for pictures of a commercial trap made by Austbat.
I reckoned that I could reduce that cost to under£200 by building my own trap, and add a few ideas of my own. Firstly, I wanted a smaller trap. With a catching area 1.8m wide and 2.4m high, the Austbat trap is unwieldy in some circumstances. It is also difficult to erect, as it is necessary to unroll and stretch the lines every time the trap is used. This process is fraught with difficulty at the best of times, let alone in darkness and pouring rain, when you're tired and fed up at 2am! My thinking was that a smaller catching area could allow for the harp section to be permanently erected within a frame. When not in use, the frame could be bagged , with the legs and catching bag removable for transport. A smaller trap would also be lighter and could be lifted on a couple of poles to cover the entrance to a high tree roost or the eaves of a roof. You can do that with an Austbat trap, but you need ropes and a team of stout people singing sea shanties, to haul it up!
And here it is... 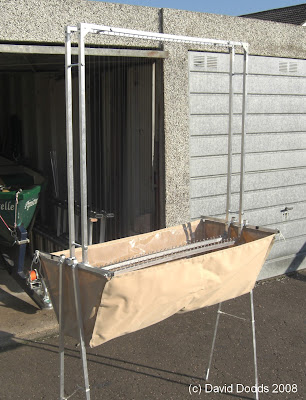 The catching section is slightly over 1m square, with the frame, legs etc, made from lightweight square-section aluminium, which also has the advantage of being an easy material to work. The legs are easy to remove, without affecting the rest of the structure, so that the frame can be slung between two poles and lifted up to a roost entrance. 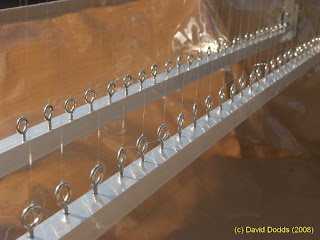 I took the opportunity to address two weaknesses I've noticed with the Austbat and similar traps. They have the nylon monofilament tied around the frame top and bottom. This has the effect of making the nylon vulnerable to scraping against rough surfaces and fraying or breaking. I tried to address this by tying the nylon lines to tiny hooks screwed into the frame, so that the frame itself protects the nyon. 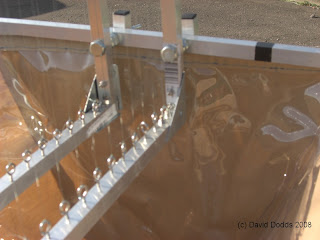 The Austbat traps are also vulnerable to escapes at each end of the bag, as the plastic material is only attached to the two long sides. I have made a point of attaching plastic to the two short sides, in the hope of preventing that. The base of the harp frame sits slightly inside the bag, to allow this to be possible.

The hardest part of building the trap was sewing the canvas and plastic. Dressmaking isn't a skill of mine anyway, and it takes a lot of effort to push a sailmakers needle through several layers of the thick canvas. My fingers may never be the same again! 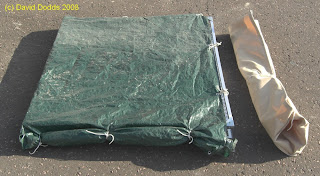 Where does the kitchen table come in? That's where I built it (it's too damn cold in the garage at this time of year!) The table still bears the scars.
Of course, I'm rather proud of the trap, but success isn't realy measured by appearance, or sound engineering or even my pride - it's measured by whether it actually works: will it catch bats?
Watch this space...
Please note that the use of a harp trap to catch bats in the UK is heavily restricted. I am able to use one because I have a roost visitor's licence, endorsed for the use of a harp trap, I am also licenced to catch a number of bats for a specific scientific study. Trapping bats without he necessary skills and licence is illegal and likely to be harmful to the bats. If you're interested in getting involved in this kind of work, the best starting point is to join your local bat group.

Keep up to date with the latest posts Facebook.com/Davidsbatblog
Posted by David Dodds at 17:17