An update on the Bat-nav

Last month I wrote about the Bat-Nav, Wildwood Ecology's GPS add-on for Anabat (Navigate that bat - January 2012). I mentioned one or two niggles about an otherwise useful piece of equipment and Bob Firmin from Wildwood seems to have lost no time in reacting (I always find it slightly astonishing that people actually READ what I write here!).

In my original post I mentioned that the Batnav unit draws its power from an Anabat SD2's USB socket. This was incorrect - it actually draws power from the serial port. They have also now launched an SD1 version (similar to the one I tested) with a power connector which clips into the battery case. 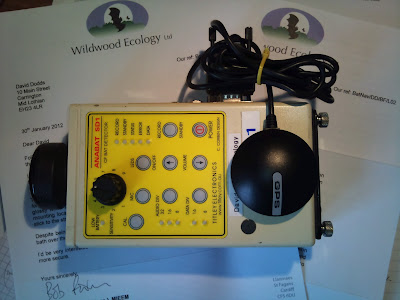 The Batnav attached to an Anabat, with the cable tied round the serial plug.

The Batnav was designed to be used with an Anabat SD2 and comes with the GPS receiver and KML generator software. Bob advises they are now developing an upgraded version of the Batnav KML generator, which they plan to sell as a stand-alone product for people using other GPS receivers or ZCA bat detectors, which is good news.

My other niggle was that the Batnav's magnet was insufficient to get it to stick to an Anabat cover (as advertised). This was fine for vehicle transects, as the Batnav stuck well to the exterior of the car, but more of a problem for walked transects. Wildwood have sourced an adhesive ferrous strip (which is oddly rustproof), which can be stuck to the Anabat, to give the Batnav something better to stick to than the Anabat case. This improves matters and allows you to stick the batnav to the rear of the Anabat instead of the front, though it may not get as good a GPS signal there. However, I find that the Batnav can still come adrift. With some experimentation I have found that the problem is actually the Batnav's slightly stiff cable, acting as a lever and forcing the Batnav's magnetic pad off the Anabat. Coiling up the excess cable round the serial plug with a cable tie has reduced the problem significantly. An alternative would be to use a stick-on cable grip (from any DIY store) on the Anabat, to stop the Batnav cable moving around.

The Batnav website: www.batnav.com
Posted by David Dodds at 15:53 No comments:

It's nice when specialist equipment designers listen to their customers: the people who will actually use the equipment they create. I recently read about the collapse of the British aircraft industry in the 1950's, due in part to designers at companies like Avro, Vickers and Handley Page who were so full of their own importance that they refused to listen to feedback on their designs from the test pilots who flew them. The inevitable outcome was aircraft which varied between being unnecessarily difficult to control to downright lethal (James Hamilton Paterson, 2011, "Empire of the clouds: when Britain's aircraft ruled the world"). Sadly manufacturers of bat survey equipment often suffer from the same malady.

At a recent conference I spent some time at the stand of one manufacturer, talking to the designer of a new bat detector. All I wanted to know was whether it could fit my needs for a particular type of bat survey. All he was interested in doing was telling me how I should adapt my survey methods in order to make the best use of his machine. Where I come from we describe that as the tail wagging the dog. Not surprisingly I have no interest in buying his rather expensive white elephant!

So when a bat detector manufacturer takes the time to listen to their customers and adapt their product to meet our needs I sit up and pay attention. Back in August 2011 I compared the Anabat SD1/2 with the Wildlife Acoustics Songmeter SM2BAT (Anabats & Songmeters - August 2011) and raised some issues with the SM2. I considered it's waterproofing to be poorer than portrayed, found the SM2 unnecessarily slow and difficult to analyse data from, compared to the Anabat. I also felt that it was less flexible than the Anabat and disliked it's memory-hungry recording format.

Wildlife Acoustics held seminars at the National Bat Conference in Warwick last year, in which they came under fire for these issues. What sticks in my mind is the statement "We are engineers, not bat experts. Tell us what you need and we'll try to deliver it", which is a refreshing approach. To their credit they appear to have taken the feedback on board and have created an updated machine, The SM2BAT+, which is now available.

The big step forward with the new machine is a hardware change which allows users the option of recording in ZCA format - the same format as used by Anabats (sadly, as it's a hardware change older SM2s cannot be upgraded). This is good news for three reasons. Firstly, it means we do not have to spend hours converting data to ZCA format in order to use Anabat's user-friendly Analook software to analyse calls. We are also saved from drowning in tens or even hundreds of Gigabytes of data as ZCA files are tiny compared to Wildlife Acoustics own WAC format (tyically 5 Kb or less).

The third benefit is a broader one: Wildlife Acoustics' Willingness to adopt the ZCA format means we are a step closer to having an industry standard recording format, used by all manufacturers. This would make flexible use of different machines and sharing of bat records far easier. I'm not saying ZCA is the best format available: WAV or WAC files do create nicer sonograms for analysis (if recorded from a time expansion detector), but their size creates many issues and in my book ZCA is the best compromise.

The new machine also has enhanced waterproofing. The internal circuit boards now have a waterproof coating, so that when you open a machine in the field the electronics are not at risk of being exposed to rainwater. It also means that any condensate which forms inside the case is less likely to create a short-circuit and cause problems. I am also aware that Wildlife Acoustics are working on providing amuch bigger moisture absorbing pouch, to help overcome the high humidity we experience at upland sites in the northern UK.

I have a shiny new SM2BAT+ awaiting the return of our bats from hibernation. Once I have had time to try it in the field I'll have more to say about it, but for now let's compare the Wildlife Acoustics approach to customer service to the slow indifference typically offered by Titley Electronics (Makers of Anabat). On the present evidence Wildlife Acoustics appear to be streets ahead. Come on Titley, it's your move: adapt and survive!
Posted by David Dodds at 11:13 No comments: