Biological recording on the hoof

My blog posts usually focus on my work as a specialist consultant ecologist or my bat conservation and research work. There are two other "hats" I wear, as chair of Lothians and Borders Mammal Group (LABMAG) and chairman of the board at TWIC, the biological record centre for south east Scotland. This post reflects a conservation issue which affects both organisations.


Biological records are the cornerstone of wildlife conservation. A comprehensive database of records allows us to understand species distribution and identify species which may be present at specific locations. This level of understanding facilitates conservation work and supports biodiversity planning. It allows us to ensure that species at threat from development are identified and action taken.


I once heard the manager of a local record centre say that, if the records held by his centre were anything to go by, the rarest mammals in their county were Rabbits, Moles and Grey Squirrels! Most recorders focus on rare or interesting species and overlook the everyday. Yet the decline of the once ubiquitous House Sparrow is a reminder that we need distribution data for all species.


I used to keep a notebook in my car, so whenever I saw a roadkill Fox, a Badger running out of the headlights or field signs whilst walking the dog I could make a note of it, to submit to a record centre. But the sticking point was recording an accurate location: getting a grid reference meant finding my location on a map or getting a GPS out and waiting for it to get a fix. With the best will in the world if a record takes several minutes to make then I am less likely to make it: I'm only human! 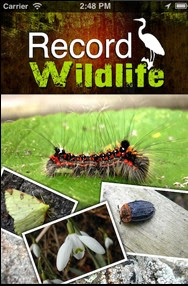 The solution lies with an iPhone app. called Record Wildlife. This draws a grid reference from the phone's internal GPS. All I have to do is type in a species name, quantity and any brief notes I want and the record is saved in the iPhone's memory. Records are saved as a spreadsheet, which can be emailed direct to you local record centre, or any other email address I choose. I experimented with this app to see if it was really as easy to use as it seems. I found I can make a record easily in about 20 to 30 seconds, making it viable to pull over the car when I see something, knowing I won't be delayed, or pause to make a record when out and about as it won't get in the way of what I'm doing. I have made 47 records of wild mammals in the past two months, easily and without any hassle, records I probably would't have bothered to make previously.


The Mammal Society recently launched a project to create a new atlas of mammal distribution in the UK. This long overdue project will give us distribution data of a type that was last updated two decades ago. I hope my records will make a small contribution to this project. If everyone with a smart phone in their pocket and an interest in natural history did the same the Mammal Society would have a great deal of extra records to work with, perhaps resulting in better conservation decisions over the coming decade.


The Record Wildlife app is available for iPhone and Android. Best of all, both apps are free to download from Android Market and iTunes.


Visit our website:www.daviddoddsassociates.com
For regular updates follow us on LinkedIn & Facebook
(David Dodds Associates Ltd) or on Twitter (@DavidDoddsAL)
Posted by David Dodds at 22:59 No comments: