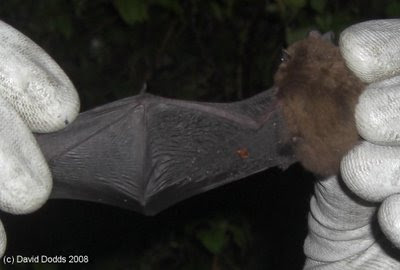 I thought I would take the opportunity to share some pictures of a little friend of mine, with a little friend of her own. She's a non-breeding female Soprano Pipistrelle (Pipistrellus pygmaeus), with a low body-weight and in fairly poor condition. When this photo was taken I had just hand-netted her as she emerged from a roost. You can just make out a reddish blob on her wing, which caught my interest. It's a species of bat bug which is widespread in the British Isles, Cimex pipistrelli.
Bat bugs are interesting creatures: members of the family Cimicidae, which also includes human bed bugs, amongst other delightful creatures. The odd thing about this one is it's presence on a bat in flight. They are temporary parasites and are normally found in cracks and crevices in the roost of the host species. They are not equipped to stay attached to a bat in flight and usually leave the host's body as soon as they finish feeding. I can only assume that this one got caught out! 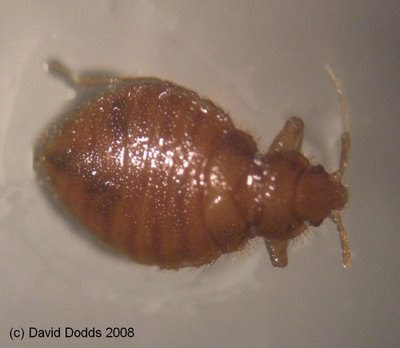 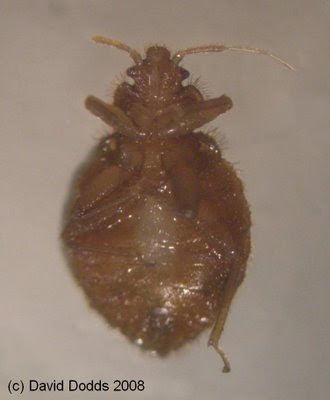 Like all true bugs (bat bugs are Hemiptera, the same order as such familiar sucking insects as Shield Bugs), bat bugs suck their food via tubular mouth-parts. They use this structure, correctly called a rostrum, by inserting it into their host like a hypodermic needle to ingest body fluids. The close-up below shows the rostrum at rest, lying in a groove below the head and prothorax. 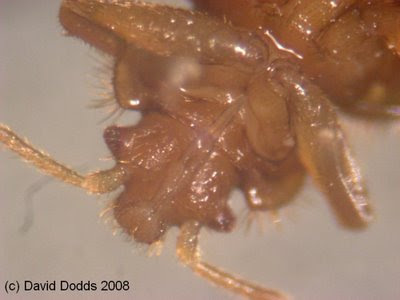 It's interesting to note that human bed bugs are thought to be descended from bat bugs, from the days when bats and humans were more closely associated than today. I can imagine Bronze Age or Neolithic people living in huts, with perhaps Brown Long-eared Bats roosting in the rafters and bat bugs gradually adapting to this larger and less difficult host.


If the pictures haven't given you the creeps, then this will: it's an article from the Lancet, which describes a house in Scotland, where a student was being bitten by what were initially thought to be human bed bugs. They turned out to be bat bugs, wandering from a roost above his bedroom. Fortunately for bat conservation, this seems to have been an isolated situation! http://www.morgellons-uk.net/pdf/bats.pdf


My website: http://www.blogger.com/www.plecotus.co.uk
Posted by David Dodds at 18:37 No comments:

I've just returned from a week-long soiree in the northern half of Scotland. Not a holiday, I'm sorry to say, but a surveying trip, working at some wind-farm sites.

Surveying wind farms is different from most bat survey work, for two reasons. Firstly, the focus is on finding commuting and foraging bats in the vicinity of proposed turbines, rather than the usual roost-finding focus of most commercial surveys. Secondly, proposed wind farms tend to be in places where no sane bat might be expected to go: exposed, windy places and bats don't usually go together.

The difficulty faced by developers (and their consultant ecologists) is that we don't know enough about how bats commute and migrate around the UK. We know that much migration takes place in continental climates, such as in mainland Europe and North America. We also know that in these places badly sited wind farms can kill many bats. So, until we understand what our own bats in the UK are doing, we do intensive surveys of wind farm sites.

Thus I came to be trekking around various nasty places in the middle of the night, carrying out 5 minute activity surveys at 100m intervals, along transects which took 4 or 5 hours to complete. Fair enough, but when the first site was a called ***** Moss I realised things could get interesting. First came the midges - hordes of the little swine, but I was ready for them with my midge hood. I amused myself squirting them with Jungle Formula and watching them zoom back for second helpings, fangs dripping with my blood (it doesn't matter how much anti-midge gear you wear - they always find a way through).

The next piece of fun was the gradual fading out of the track I was following across the site. Having got lost twice in the dark and had to GPS may way back to a known point on the transect, my sense of humour was beginning to fail me. A quick look at the site plan revealed I needed to follow a fence line for the next part of the transect. I'm not entirely sure why the soggy peat that surrounded that fence didn't suck it down, but it made up for it with me. I consider myself a patient man, but I do recall howling into the wind, as I pulled myself out of my third bog hole, holding the precious Anabat over my head "Wind farm? As far as I'm concerned, they can TARMAC the bas***ding place !!!!".

The next site seemed more civilised, at least from a survey point of view, if not an ecological one. A prairie-sized arable farm, with hardly a hedgerow to be seen and every crop planted close up to the field boundaries. It looked easy enough to traverse, until I met the delights of mature Oilseed Rape. This stuff stood higher than me, stank like Satan's bottom and did it's best to trip me up with it's stout stems as I tried to navigate the eighteen-inch gap between the crop and the barbed-wire fence. But the real problem was the Cleavers. You know, Cleavers, Galium aparine a.k.a. Sticky-weed, Goose Grass etc? Harmless, amiable stuff? Not when it grows in great swathes, fed with nitrogen by the Rape. It grew taller than me, with stems as thick as my little finger, twisting round itself to create a miniature jungle of impenetrability, constantly tripping me up in the dark as I tried to force a way through.

A bat surveyor's lot is not a happy one etc. etc.

Oh, and bats? Surprise, surprise, there were very few and mostly in the obvious places round the edges of the sites.

I said "mostly" and what was interesting was that both sites produced snippets of bat behaviour that went against the books and perhaps justifies some of the survey effort expended at these sites. First, I watched a Common Pipistrelle (Pipistrellus pipistrellus) patrolling up and down a track, feeding on midges. The odd thing was this track was in the middle of a wind-swept moss, without hedgerow, fence or any kind of above-ground feature.

The second interesting thing was a small colony of Common Pipistrelles dispersing from their roost across arable land. Some were following field boundaries, as you might expect, one followed the route of a former field boundary (working from memory?) and I watched another set a course across open arable fields.

We still have a lot to learn about these animals...

My website: www.plecotus.co.uk
Posted by David Dodds at 20:04 No comments: