The Diffusion of Useful Knowledge

Having a first degree in history I have always had an interest in how our understanding of bats has developed down the years (see "An 1892 bat-worker", January 2009). Today's post brought me a copy of "The Penny Magazine of the Society for the diffusion of useful knowledge", published on 7 January 1843.

My first thought was what a wonderful-sounding title and what a sign of the times that there existed a Society for the Diffusion of Useful Knowledge. The Victorian moneyed classes were incredible busy-bodies and loved trying to enhance people's lives, often in rather idiosyncratic ways. (Strangely, paying people enough to live on was rarely considered a way of enhancing lives!) 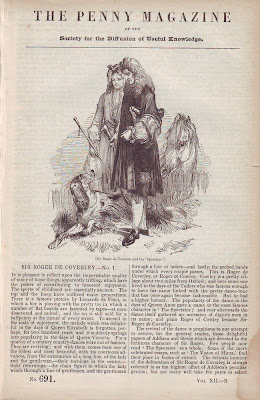 A regular feature of this paper is a series entitled "Curiosities of British Natural History" and this issue's feature is about bats. Sadly, the author's name is not given but it was either someone who knew the subject or who did a good deal of research as it contains several pages of detailed description of the subject.

Above the start is a gorgeous engraving, showing a Noctule, a Pipistrelle and a Long-eared Bat. The latter has a thoroughly cheesy grin on its face and the Noctule looks too portly to fly, but some of the anatomy is surprisingly detailed: presumably they were engraved from dead specimens. 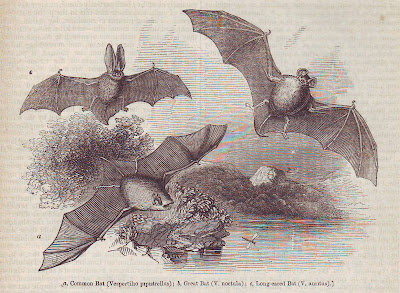 The article begins with the enticing statement "It may surprise some of our readers to be informed that sixteen or seventeen distinct species of bats are natives of the British Isles". What?! That is our current understanding (depending on whether you include the Greater Mouse-eared or not). In 1843 the two Pipistrelles had not been separated, nor had Brandts and Whiskered Bats. The finding of Nathusius Pipistrelles in Britain was long in the future and, although it had been described elsewhere, I don't think the Grey Long-eared had been discovered in Britain at that time.


So what were the other four species? Unfortunately, the anonymous author doesn't tell us. In fact he only describes eight species, dismissing all the others as "extremely rare and restricted to certain localities". Was he guessing? Was he reading a foreign book and assuming the same species were here? Was he including some long-dismissed sub-species or perhaps bats found in part of the Empire? How frustrating!


The species he describes are: The Common Bat (Pipistrelle); The Great Bat (Noctule); The Long-eared Bat; The Barbastelle; The Reddish-grey Bat (Natterer's); the Whiskered Bat and the Greater and Lesser Horseshoe Bats. The obvious missing species is the Daubenton's, which must surely have been known at that time and would have been relatively easy to distinguish.

As with all writing of the era, wordsmithing was a priority and some of the descriptive text is fantastic: "Often during warm summer evenings have we seen numbers, perhaps several scores, of the Common Bat flitting over pools, in chase of gnats and similar insects, or gambolling with each other in a mazy dance, ever and anon uttering sharp shrill cries of exultation and delight..." The shill calls were presumably social calls, which are sometimes just within the range of human hearing. Incidentally, a score at that time was an innocent number twenty, in case you think the author was using dried bats for questionable purposes.


The piece includes a surprising amount of scientific detail, for example listing the species found to hibernate in caves as Natterer's, Whiskereds, Barbastelles and Long-eareds, though again Daubenton's are conspicuously absent (could it be they confused them with Natterer's at this time?). Given that this was a popular paper, not a scientific journal, there is a remarkable amount of detail: something today's press could learn from.


As with today's press however, the author just can't resist a lurid story and describes bats stealing bacon from chimneys and eating meat in larders. Not perhaps as daft as it sounds, in an era when bacon was hung in chimneys to cure and when meat was kept open in a larder. Houses would have been quite porous to bats at that time and I can imagine a stray Pipistrelle within a house, finding itself next to a joint of raw meat, having a nibble, possibly for the water content.


Something exciting about old texts like this is when they describe the location of bat roosts. The author mentions a Noctule roost under the eaves of Queen's College Cambridge and Greater Horseshoes occupying caves "at Clifton and in Kent's Hole, near Torquay". If anyone reading this lives in those areas, it would be fascinating to know if these sites are still occupied, 166 years later!


At the time this paper was produced, people were still grasping to understand how bats found their way in the dark, and, reading the author's description one gets a sense of his frustration: they knew there was something special about it, but couldn't quite put their finger on it:


"There is a singular property with which the bats is endowed, too remarkable and curious to be passed altogether unnoticed. The wings of these creatures consist, as we have seen, of a delicate and nearly naked membrane of vast amplitude considering the size of the body; but besides this, the nose is in some furnished with a membranous foliation, and in others the external membranous ears are enormously developed. Now these membranous tissues have their sensibility so high, that something like a new sense somehow accrues, as if in aid of that of sight. The modified impressions which the air in quiescence, or in motion, however slight, communicates; the tremulous jar of its currents, its temperature, the indescribable condition of such portions of air as are in contact with different bodies, are all apparently appreciated by the bat." So near, yet so far!

For years Alana Ecology have been the benchmark supplier for wildlife survey equipment. They were never the cheapest supplier, but their catalogue always drew together kit from a huge range of manufacturers. It always seemed to include the very best equipment and this was coupled with excellent advice: if you called you always found yourself speaking with someone who actually understood what you needed and knew the best solution.

Not surprisingly, for me and for many other people who work with wildlife, both professionally and as a hobby Alana became the standard supplier for everything: a reliable source of advice and good kit.

Over the past couple of years there seems to have been a disappointing deterioration in the standard of service provided by Alana: late and missing deliveries; failure to keep the customer informed, failure to call back etc. After several instances of this kind of poor service I started looking around to see who else is out there and a colleague told me about Envisage Wildcare. Their catalogue isn't quite as comprehensive as Alana's (and irritatingly, you have to download it, you can't simply view it on the web), but most of the key equipment is there.

When I needed a new endoscope I decided to give Envisage Wildcare a try. I phoned at 4pm and spoke to someone who took my order. Pushing my luck, I asked if it would be possible to have it delivered the next day? "Erm, yes, but the van is arriving so I'll need to put the phone down now and run". That is the kind of service that attracts attention and true enough, next morning the endoscope arrived.

Since then, I have heard about several other examples of this kind of thoughtful, professional service, experienced by others. I do think that we would be best served by two good companies in competition: that way they keep each other up to the mark and keep prices low. Having heard a couple of people say recently that had gone elsewhere, I hope that Alana recognise and address their service. They have great expertise and I certainly haven't written them off.

If I were to send messages to both companies it would be this:
Alana - sort out your service, keep your customers informed about their orders and lose the complacency.
Envisage - keep doing what you're doing, but for heaven's sake set up a proper on-line shop, instead of the irritating pdf download.

My website: http://www.plecotus.co.uk/
Posted by David Dodds at 13:44 No comments: