I have written before about my good opinion of the Anabat SD1 (now replaced by the SD2, with some minor upgrades), a machine which offered huge advances in passive monitoring of bats (i.e. leaving a machine on site to continuously record bat calls), in use with a GPS receiver for walked and car transects (where a route is followed, recording bat calls and their locations) and for use as a training aid when connected to a PDA personal computer, to display live sonograms of bat calls. Prior to the arrival of the Anabat the only way of doing these surveys was with a Frequency Division bat detector, recording WAV (or poorer MP3) audio files: a massively time-consuming and data intensive process, so the Anabat was a big step forward.

Like all good things, the Anabat had some downsides: reliability has never been as good as it might be, technical support is patchy and confusing and the price (around £1400) is prohibitive for many users. So the arrival of the rival Songmeter SM2 on the UK market last year generated a lot of interest. At around £800 it is clearly cheaper and many bat workers and ecologists were excited to try out the latest generation of bat detector. Personally, I was quite cynical and, having had the chance to use several Songmeters this year, my reservations may have been justified. Let me clear though: I am not saying that the SM2 is not a good piece of equipment: it has a lot going for it. What I am saying is that, just like the Anabat, it has strengths and weaknesses and to claim as some have, that it is a technical advance on the Anabat is simply nonsense!

The two importers of the Songmeter, Alana Ecology and Envisage Wildcare have marketed the Songmeter powerfully in the U.K. and it's arrival on the market suggested that it was a new and exciting development. In fact the Songmeter had been on the market in the U.S., alongside the Anabat for quite some time. Anabat had been successfully sold in the U.K. by both companies for several years and both provided excellent technical support. In early 2010 Titley Electronics (who make the Anabat) suddenly withdrew the product from them and set up a European sales office in the U.K. Deprived of a key part of their product ranges, both companies looked around for a replacement product and settled on the Songmeter. So it's arrival here was a result of commercial necessity, rather than technical development and the flurry of interest in it is primarily a result of marketing hype. So I was interested to get my hands on some Songmeters this year and find out how they match up to the hype. 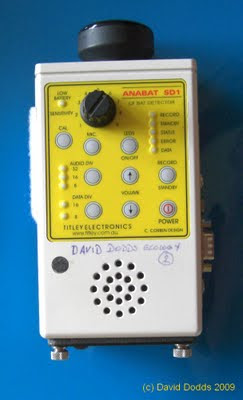 An Anabat SD1. The later SD2 version has a USB socket on the right-hand side, rather than a serial port. The velcro on the left was stuck on to allow a GPS receiver to be attached for transect work.

A key advantage of the Anabat is the fact that it converts bat call audio to a digital format, so that each bat pass generates a tiny file of around 2-5KB. Thus a 2GB memory card can last weeks or even months, without needing to be replaced. The SM2 records WAV high quality audio, compressed to form WAC files. Theoretically, this allows the creation of better quality sonograms for analysis. Unfortunately, the compression results in very large files, compared to Anabat. My experience of using SM2 has been of long hours spent downloading, copying and converting many tens of Gigabytes of data. The Songscope software supplied by Wildlife Acoustics (the makers of Songmeter) is expensive and unpopular, so that most people use Analook (the Anabat software) to analyse Songmeter data. Wildlife Acoustics supply a free program (WAC2WAV) which converts WAC files to ZCA format, so they can be analysed using Analook. However, running WAC2WAV on large amounts of data (and most passive monitoring produces large amounts of data) is slow and tiresome.

Using Anabats for passive monitoring has always created the problem of waterproofing, leading to many imaginative ways of keeping Anabats dry and free from condensation when used in the field. Unfortunately, long-term use in our wet Scottish climate has always been a problem, with inevitable condensation build-up leading to failure if the machines aren't occasionally taken somwhere warm, to dry out for a few days. The SM2 case is waterproof in itself and needs no further protection. It also addresses the Anabat problems by including "Humisorb" pouches inside the units and having a valve to equalise air pressure inside with that outside. That sounds ideal and would be...if it worked. At present several of the SM2s I am using have proved unequal to the challenge of a cold, wet upland site, with quantities of condensation present inside the machines. In fairness, none has yet stopped working and the manufacturers have proved keen to find a solution. Only time will tell if they are successful.

There is a clear cost benefit in buying an SM2, rather than an Anabat, but there are also hidden costs. A 2GB CF card for an Anabat costs around £15, but a set of four 32GB SD cards for an SM2 could set you back several hundred pounds (how many you need will depend on how often you download data). SM2s have internal capacity for a set of outdated D size batteries. The machines reportedly do not respond well to the lower voltage produced by rechargeable batteries. Happily the machine, like the Anabat, will work with an external Sealed Lead Acid Battery. Unlike the Anabat, you will have to pay around £100 for an external voltage regualator. Oh, and if you want the software designed to be used with the Songmeter, that will be another £500.

Probably my biggest beef with Songmeter is its lack of flexibility. It is a passive monitoring machine. Full stop. Anabat has a range of potential uses, as I described above. The SM2 does have some interesting potential though. For example, it comes with an in-built temperature recording unit. It also has the ability to work with two separate microphones concurrently. Potentially, this allows some interesting studies to be carried out, using extension microphone cables. For example, recording the direction of bat movement along a linear feature such as a hedgerow or comparative studies of bat activity at ground level and at height. 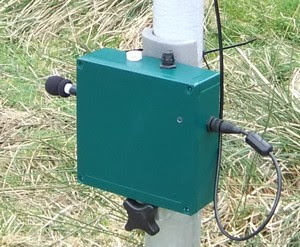 A Songmeter SM2 in position, attached to a post. This unit is being operated with two microphones simultaneously.


Another intersting feature of the Songmeter is it's omnidirectional microphones, which pick up bats in all directions. This is potentially a useful feature in a passive monitoring machine. When a detector is used in the hand we tend to point it at bats we hear, getting the clearest possible calls. When a detector is used passively the directionality of the microphone works against us, so an omnidirectional microphone seems a good idea. However, it has drawbacks too. A microphone which picks up bat calls in all directions also picks up background noise from all directions too, reducing the gap between noise and bat calls. This could easily reduce the clarity of a recording and increase the number of non-bat ultrasound recordings.

My biggest beef with the Anabat has always been it's limited ability to keep accurate time. Over a period of weeks they are fine, but over protracted periods of use the internal clocks tend to lose or gain time. So far the SM2s I have been using have been reliable in that respect. They also have a useful ability to be set to start and stop recording at specified periods before sunset/after dawn, rather than specified start/finish times, as with the Anabat. This saves having to reprogram them through the year, to reflect changing dawn and sunset times.

One colleague I spoke to this year was hopeful that using SM2s intead of Anabats might reduce the number of equipment failures. Sadly that hasn't been my experience. It's easy to think that, when you buy a machine with a high price tag you are getting high quality electronics, but electronic development doesn't really work that way. The major cost in producing any electronic equipment is the initial development cost. If you are developing a new iPod, confidently expecting to sell millions of units, you can afford to invest millions of pounds in perfecting the design. If you are developing a bat detector, with an expected sale of a few thousand units then the development budget is inevitably much smaller. In this respect both machines are in the same boat and they appear to have an equal propensity to fail.

So what would I spend my cash on? Well, the SM2 is an interesting piece of equipment, with some useful features. It had the potential to knock the Anabat for six on waterproofing and reliability, but so far it has proved no better on either score. It lacks the Anabat's flexibility and it's memory-hungry format is time-consuming to manage. So, unless I was involved in a project which could benefit from the specific extra capabilities of the Songmeter I would spend my hard-earned cash on an Anabat.

Titley Electronics (maker of the Anabat)


My website: www.plecotus.co.uk
Posted by David Dodds at 12:13 No comments: