During 2007 and 2008 I spent some time on investigating the distribution of Noctules (Nyctalus noctula) in south-east Scotland, a region where the species was traditionally considered scarce and probably beyond it's natural range. I gathered together incidental records from many bat-workers (thanks!), some focussed car surveys and records from commercial bat surveys carried out by a number of consultants, including me.
The result was a clear indication that Noctules are widespread in the Borders and Lothians regions and probably at a greater density than was previously realised. The results were presented in a poster at the B.C.T. Scottish bat Conference in November 2008. If you're interested you can download a copy as a .PDF file here: http://www.plecotus.net/Noctule-poster.pdf (You are free to distribute this information, in the interests of bat conservation, but please attribute it)

One evening in September I was relaxing in the bar at Preston Montford Field Centre, near Shrewsbury during a training course. My phone made one of the irritating noises that mobiles make, to tell me I had received a text from Carol and Nigel, both active members of Lothians Bat Group. They attached a photo, with the tongue-in-cheek message "do you know what this is?!" You're probably ahead of me here - it was a Noctule, of course. To rub my nose in it, they had found it in a bat box at a country park 2 miles from my home. If I hadn't been on the course I would probably have been there when the boxes were checked. Grumpy wasn't the word for my response....

To their credit, Carol and Nigel had found the first ever Noctule in a bat box in Scotland and it resulted in some positive press coverage for bat conservation. Fast forward two weeks when I was checking bat boxes at another country park, also in Midlothian and believe it or not, there was another Noctule. Like Nigel and Carol's this was an adult female, squeezed into a slim bat box. She was a delight to handle: very relaxed, even when I placed her on a log to photograph her, before returning her to her box. She was also kind enough to give up some Spinturnix acuminatus mites (well, I was happy about it, even if my companions were a little taken aback). 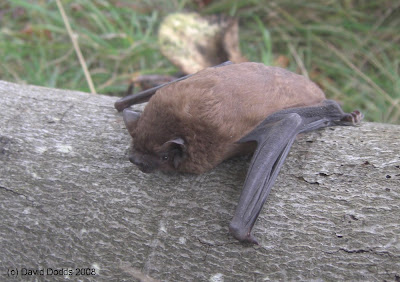 To put this in context, these two animals were both found in boxes in a county where I can count previous records of Noctules in flight on my fingers. Was it coincidence (or was it the same bat, with a sense of humour?) or does this tie in with our new knowledge of the spread of Noctules? It was certainly a surprise in an area with many bat box schemes and two decades history of only ever finding Pipistrelles in them. By coincidence, in 2007 and 2008 a small colony of Natterer's Bats were found in a West Lothian bat box, so these Noctules seemed too good to be true.

Stuart Smith, chairman of Lothians Bat Group (and one of the grandees of Scottish bat-work), came up with an unusual plan to respond to these new records by installing some new bat boxes, higher than normal, something he had seen at a Vincent Wildlife Trust site in Dorset. Most bat boxes in the Lothians are between 12 and 20 feet (3.7-6.1m ) above ground. Noctules are tree-roosting bats, with a tendency to roost in tree holes, often high up, so higher boxes makes sense. The problem is that 20 feet is the maximum height for access by ladder, without extra safety measures and skills.

The solution? Suspended bat boxes! We used Schwegler woodcrete bat boxes, suspended from pulleys attached to high branches. Wire rope is used to pull the boxes up to full height -around 40-45 feet above ground (12.3-13.8m) - and tied off on bolts mounted on the tree trunk. These are at ladder height, to prevent the local "yoof" from reaching them. When we need to check and clean the boxes we will simply climb a ladder to normal height, unwind the wire rope from the bolts and lower the box to ground level. Once finished, we simply haul the box back to the top of the tree and tie off the wire rope once more. Ingenious! 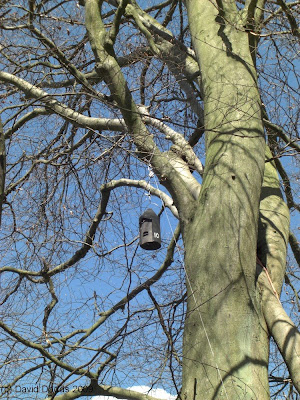 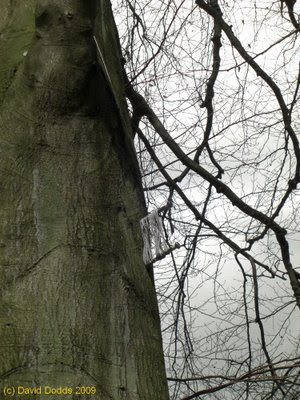 Now, there is a chicken and egg problem here: how to get 40 feet up to mount the pulley? The Bat Group is lucky to have access to the services of a professional tree-climber, who also has an affinity for bats. George used his skills to climb the trees and install pulleys for us, making it look easy, as tree climbers always do. However, it's very hard work: you need to combine a high level of physical fitness with some somewhat counter-intuitive skills. Come to think of it, strolling about at the top of a tall tree as about as counter-intuitive as it's possible to be! 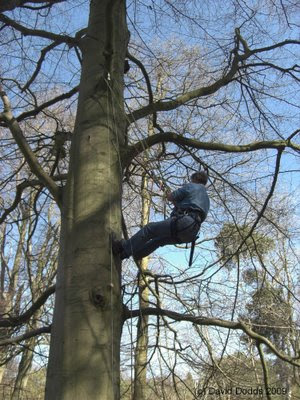 Watching a bat-box being hauled 40 feet into the top of a tree was quite exciting. Whether they will attract Noctules remains to be seen...

With work over for the day, George offered a couple of group members the opportunity to try out tree climbing techniques (at very low height) and so, trussed up and roped to the tree, we took our turns at making fools of ourselves. I had tried my hand at this in the past, so probably should have known better, but didn't.

An advantage of this being my blog is that you won't get to see my feeble attempt at tree climbing. However, this seems a good moment to wreak revenge on Carol for last year's Noctule text message. You have to hand it to her: she's enjoying herself, even if she isn't making much progress up the tree!

Last year I described a home-constructed bracket for attaching a PDA over the face of an Anabat SD1 bat detector (Ana...nother thing or two about the SD1, November 28 2008)

Although not as strong as the brackets sold by Titley Electronics, my bracket has the advantage that, if dropped during a survey, the bracket is likely to give way and protect the PDA and its precious data. It also cost roughly a 50th of the price of buying theirs, which is handy in the current economic climate.

Several people have contacted me to ask about the design. It's very simple, virtually "Blue Peter" construction, though without the sticky-backed plastic (I could never put that stuff on without bubbles anyway!)

For anyone who wants to try making one, I have put the details onto a .PDF file, accessible here: http://plecotus.net/Anabat-PDA-bracket.pdf

If you make one please let me know how you get on: mailto:blog@plecotus.co.uk

My website: http://www.blogger.com/www.plecotus.co.uk
Posted by David Dodds at 16:25 No comments: 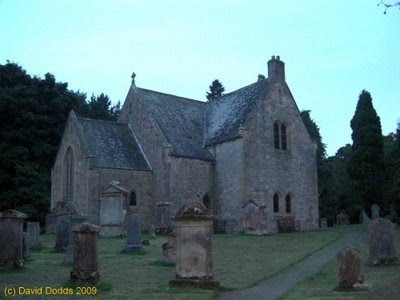 Last night I took a group of ecology undergraduates to a 200 year-old kirk (that's church to those without a Scottish education) in East Lothian, to watch for bats. I had my fingers firmly crossed on the way there: although I know the church and churchyard to have plenty of summer bat activity it is still very early in the season for bats to be at all dependable.
In the summer the kirk has a Soprano Pipistrelle (Pipistrellus pygmaeus) maternity roost within the roof structure and also has Brown Long-eared Bats (Plecotus auritus) inside the kirk itself - during the summer there is usually a light scattering of droppings over the pews. Last year I watched one flying up and down inside the kirk, warming up before going out to forage.

The most I could really hope for was that there might be one or two individual Pipistrelles foraging around the kirkyard - it's in a secluded, tree-lined valley, alongside a burn (or stream if you prefer), so it's good foraging habitat, even this early in the season.


When we arrived and walked round there were no droppings inside the kirk, althought there were some on the exterior, making me hope that at least a few of the Pipistrelles may be present.

At sunset a few Soprano Pips overflew the kirk at first, commuting from other locations in the valley. Then there came an excited squawk over the radio, announcing that someone had seen a bat emerge from the edge of the kirk roof and we watched about 30 Sopranos emerge from the same spot where I watched several times that number come out in the autumn last year. 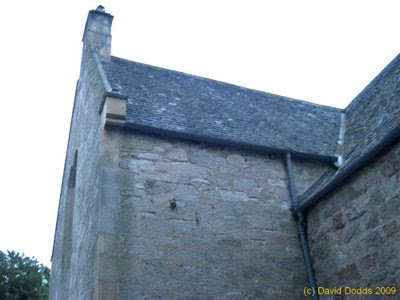 I am sure that there will be many more than 30 bats in that roost in mid summer, when Soprano Pipistrelle females gather in large numbers to rear their young - these are probably the first arrivals. Interestingly, we also heard a male Soprano in songflight, the string of mating calls designed to attract mates. This is primarily an autumn activity, but seems to occur a little in spring as well.

It's not hard to see why the bats are active so early in April. The chart below shows night-time temperatures at the Met Office's Gogarbank station, near Edinburgh. There have been two weeks of fairly consistent temperatures around 7 to 8 degrees, which seems to be the level at which bat activity in this area picks up. As a happy coincidence, last night was also the warmest night of the year so far. 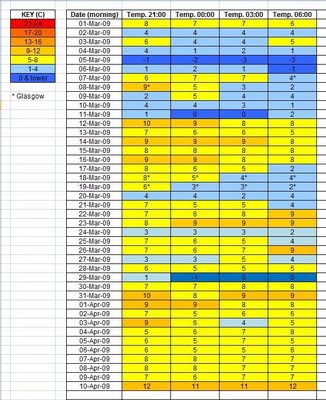 However, this might not be the end of the story. It's still very early in the year and weather is never as reliable as we would like. As you can see below, last year April started off warm like this and then went into a cold period for a couple of weeks, causing bat activity to fall away until nearly the end of the month. Only time will tell what will happen this year. 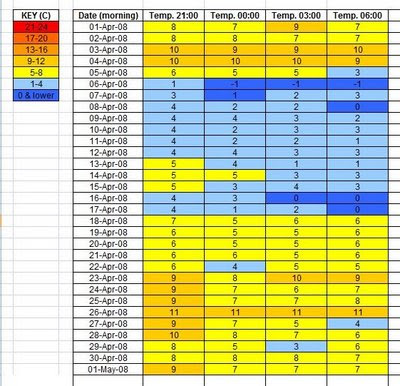