A Result of Careless Angling

We often hear about the terrible effects that abandoned fishing line and hooks can have on swans, but it isn't so often we hear how it also affects bats. Hear in Scotland the main form of recreational angling is fly-fishing and a fly designed to be attractive to a trout can have just the same attraction for a bat.


One recent Sunday morning I was hoisted from my slothful lie-in by a call from the Pentland Hills Ranger Service. A member of the public had spotted a bat suspended from a telegraph wire alongside a loch used as a fishery and Victor (one of the Rangers) was hoping I could help. The Pentland Hills are close to my home and half an hour later I was standing beside him, looking at the bat, suspended above our heads. It was showing no signs of life. 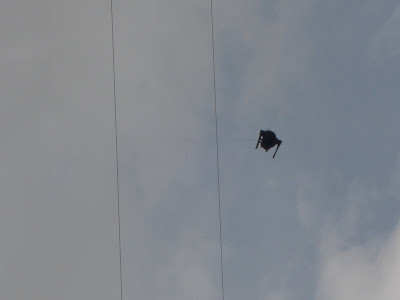 The first problem was working out what the set of wires carried, as I had no desire to get mixed up with high voltages. Fortunately the bat was dangling from telephone wires. The next problem was how to reach it, 6 metres above the ground. I had brought a telescoping ladder and we tried lashing this to the side of the Ranger Service Landrover. Not only was climbing it not an experience I would repeat in a hurry (awfully wobbly!), it didn't get me high enough to reach the bat.

Enter the owner of the fishery, stage left, with a knife lashed to the end of a long pole (which shows how often this particular problem occurs) With a bit of work the bat was cut free and fortunately had a soft landing. It was a juvenile male Soprano Pipistrelle (Pipistrellus pygmaeus), tangled up in a length of fishing line with two hooked flies. It seemed barely alive, though that may have been partly due to the amount of line tangled round it. 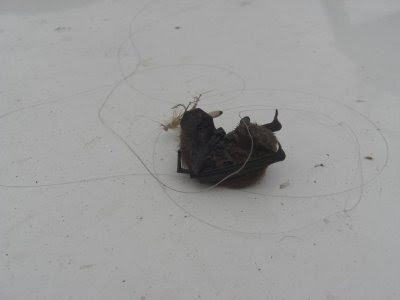 It transpired that the bat had a fly caught in it's mouth, presumably because it had seen what looked like a tasty meal swaying in the wind and attempted to catch it. In the warmth of the vistor centre it started to move about more. I couldn't see the tip of the hook and, as it was quite deep in his mouth, I couldn't be sure if it was caught in his throat. Luckily he was able to drink and later, at home took some minced up cat food (sorry Haggis, but the bat's need was greater than yours!), suggesting he wasn't too badly hooked. 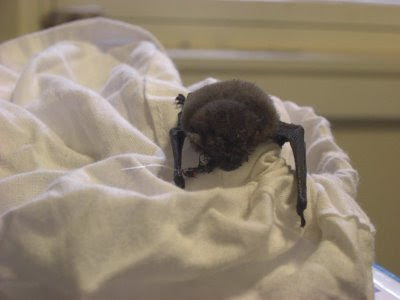 The next morning I contacted the Dick Vet Small Animal Hospital, part of Edinburgh University. Kevin Eatwell, one of the specialist wildlife vets there anesthetised the bat and removed the hook. He seemed none the worse for wear and that evening I took him back to a spot close to where he was found and released him.

On the 300m length of telegraph wire which runs parallel to the loch I could see seven other lengths of fishing line caught around the wire, at least one of which carried a hook. Not only is this the result of bad casting, leaving it without bothering to tell anyone is nothing short of criminal, especially as the fishery owner is equipped to remove it. After all, there has been considerable publicity about the dangers posed to wildife by abandoned fishing tackle causes.