Pipistrelle Roosts: from Intermediate to Maternity

The roosting cycle of the commoner UK bat species is reasonably well understood: hibernaculum in winter, then move to an intermediate roost in spring. In the breeding season, the females move into maternity roosts and in most species the males use other sites. Once the young are flying in late summer, intermediate roosts become important again, with mating roosts used in some species, then it's back to hibernacula. More often than not, we only see little snippets of this and have to work hard to interpret what we see. I've been lucky enough to see a slightly bigger piece of the picture with two Soprano Pipistrelle (Pipistrellus pygmaeus) roosts I've been working with recently.
The first is the site at which I videoed swarming bats in May ("Dawn Swarming", 15 May). On that occasion I saw around 70 bats swarming, 30 of which entered the roost, the remainder flying off to the north-east. We know of another roost about 500m away in that direction, so clearly there was likey to be a link. Last week I returned at sunset to do a colony count and volunteers from Lothians Bat Group went to the other roost site to the same thing simultaneously. 48 bats had been counted at the other site a week previously, so I was intrigued to see which roost would be used for breeding.
Unexpectedly, only three bats emerged from "my" roost. I hand-netted one of them, which turned out to be a very small non-breeding female. She was in poor condition and was carrying an enormous (by Pipistrelle standards) Cimex bat-bug (a close relative of the human bed bug) on one wing and huge numbers of Macronyssidae (a family of tiny mites).
Incidentally, it's quite unusual to see a bat-bug attached to a bat outside of the roost. They are not really equipped to grip on to a rapidly moving wing for long and normally feed from bats within the roost, dropping off before the bats emerge, so it looks like this one got caught out! It's probably Cimex pipistrelli, but there are records of another, rarer Cimex species on bats and I'll reserve judgment until I have it under the microscope. 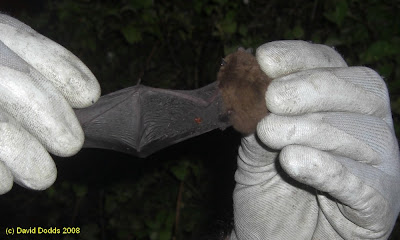 Here you can clearly see the Bat-bug (Cimex sp.) on the bat's wing

And the other site? Only thirty bats emerged, suggesting that the maternity roost is probably somewhere else entirely. What we now need is someone mad enough to prowl the streets of Edinburgh at dawn for a few days, looking for a swarm of bats, to tell us where the maternity roost is! It's not that we really need to know, but it would be nice to find the missing jigsaw piece.

The other site is the one I mentioned in February ("Two Roosts for the Price of One", 6 February), with droppings of two species in the attics. As yet the Brown Long-eareds (if my dropping analysis is correct) haven't put in an appearance. At dawn one morning in May, I watched 7-10 Soprano Pipistrelles swarming around the gable end of the "wrong roof", i.e. the attic which did not have Pipistrelle droppings in it in February. Did I have it all wrong? Was the maternity roost actually here? 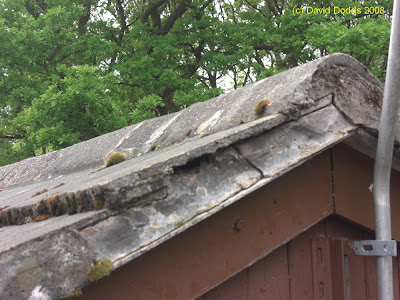 (Below) Droppings stuck to the timber facing below it, 3 weeks later 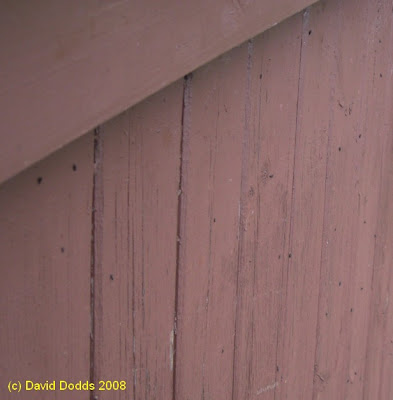 When I returned with a team of helpers at sunset last week, there were many droppings stuck to the wall around the access hole the bats had been using on the previous visit, indicating it had seen some use. However, at sunset no bats emerged from there. Instead, 118 bats emerged from two holes in the gable end of the main attic, right where I originally found piles of droppings within the attic. So, not only were we able to confirm the location of the maternity roost, the May visit enabled the identification of an intermediate roost, which wasn't apparent from signs within the attic.

Bats are always enigmatic and rarely give up their secrets easily. It's nice when, once in a while, we can see tiny bit more of their lives than the usual tiny snap-shots...

I lean against the rough, damp bark and stare hard, waiting for it to show. Unseen, a pair of beady eyes peers from a crevice and waits for ... 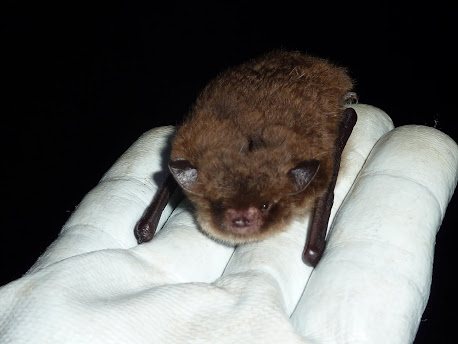