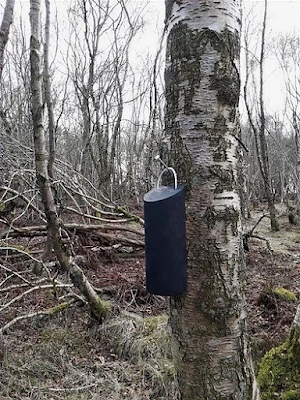 A Lunar Environmental bat box
(Image copyright Lunar Environmental)
I've long been an advocate of woodcrete or woodstone bat boxes (the terms appear to be interchangeable, though may be trademarks for all I know). German-made Schwegler bat boxes have been around for many years, in a wide variety of shapes and sizes, have become pretty much the standard for good quality bat boxes and are widely used.

Moulded of a wood-fibre and cement mix, these boxes have better insulation than more traditional wooden boxes and a much longer life-span. Unlike wooden boxes, which rarely last much more than a decade (poorer ones often rot even more quickly), these last pretty much forever, unless some brat decides to lob half-bricks at them - they tend to break if a direct hit is scored - so they're an ideal solution for mitigation/compensation schemes. 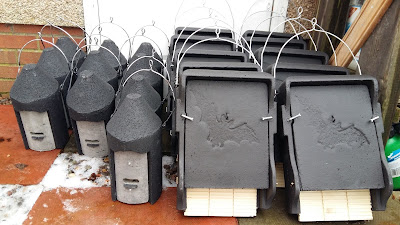 Some Schwegler boxes, destined for a development site several years ago

The weakness of Schwegler boxes has always been their price. At about £35 for the simplest type (2F), which Blue tits can find their way into, and about £15 more for ones with a wooden baffle (2F-DFP), which discourages the blue and yellow feather-rats, they're not cheap. However, the cost is mitigated by their higher take-up rate - I've often found them to have two or three times the occupancy level of wooden boxes, probably aided by their better insulation properties and consequent slower changes in internal temperature.

So what's not to like? Nothing, except that they disappeared off the market several years ago. All the suppliers still list them, but are perpetually out of stock. I've heard numerous claims that this has been caused by a fire at the factory, problems with raw materials, Brexit, massive demand elsewhere in Europe etc. Whatever the cause, you simply can't get them. So what to do?

CJ Wildlife sell a Vivara Pro bat box, made from a similar material. Their price point is much more reasonable than the Schwegler boxes, at around £20-25. But I'm not a huge fan of these - they are less robust than the Schwegler products and have to be mounted using a rather feeble attachment, which does not inspire confidence and makes it impossible to hammer a nail in and bend it over (my preferred way of attaching a box to a tree, to prevent is blowing down in winter). In fairness I haven't seen one fail...yet. They also look a bit like a twee bird-house, but that probably bothers me much more than it would a bat! 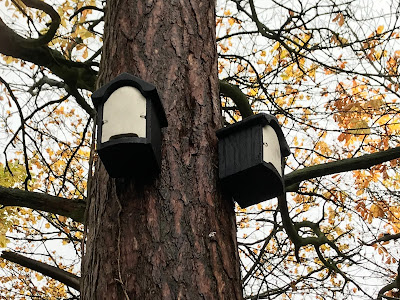 So for the last couple of years I've been using Vivara Pro boxes and hoping that Schwegler would sort themselves out. But now I've found an alternative that I'm rather impressed with. And they're based in Scotland. Given that these things are pretty heavy, carbon footprint is a factor.

Lunar Environmental, a small firm based in Aberdeenshire, are moulding their own woodcrete boxes and selling them direct. What's more their price-point is good, with a micro box at £25 and a macro one at £35.  The macro is 31cm tall and 15cm diameter, whilst the micro is 26cm tall and 10cm diamter. The boxes do not have an openable door, but instead have a sloping floor, leading to an entrance slot in the base, making them self-cleaning. They have a curved back, helping them to sit against a tree-trunk, but seem to work ok mounted on a wall as well. The attachment is a loop of rust-proof cable, moulded into the top of the box. 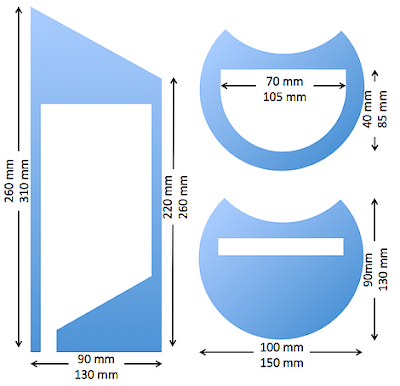 I really like these boxes - they have a solid, well-made feel. Kevin Wright not only understands bats, he also worked in concrete moulding in a previous career and has been able to combine these two disparate skill-sets. What I really like is that he's thinking about the product and how to perfect it. Interestingly, these boxes have a lower wood content than the other types on the market and use vermiculite instead, to enhance the insulation properties of the boxes. 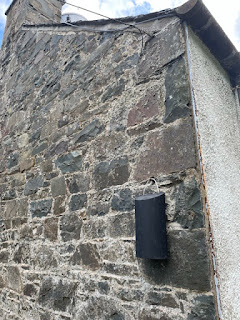 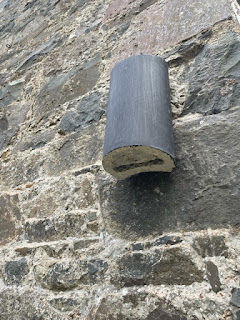 One of the Lunar boxes, mounted on the gable end of my house
Incidentally, they also make bespoke boxes. Kevin is currently working on a batch of crevice bricks for me, for an artificial hibernaculum project we're working on.

So, if you need a batch of boxes for a project, I'd suggest giving Lunar a try.