This is the time of year when bat survey equipment starts to get dusted off and checked over, ready for the new survey season. Top of the list of course is the bat detector ( I can't even begin to understand what it must have been like to survey for bats before portable detectors was available).

Many bat-workers make recordings of bat calls they hear in the field, either so they can have a second attempt at identifying a bat at home, with a glass of something warming or, in the case of frequency division or time expansion detectors, to look at calls using Batsound or other call analysis software. I thought this would be an opportune moment to look at the connections between the detector, the recording equipment and the computer. It seems simple enough, but there are a few easy errors, which are less obvious than might be expected.

To understand how to connect things properly we first need to understand a couple of techy things about jack plugs and sockets:

Jack Plugs
There are several types of audio jack plugs, but virtually everything we are interested in uses 3.5mm jacks. There are two types: mono and stereo. The stereo plug is connected to three wires: one common and one for each of two audio channels (normally used to create that "close your eyes and visualise the orchestra" effect by producing slightly different versions of a music track in each ear). The mono plug has only two wires and, you've guessed it, only one audio channel.

Where it gets slightly tricky is that the mono and stereo jacks are the same size and fit into sockets intended for one another. 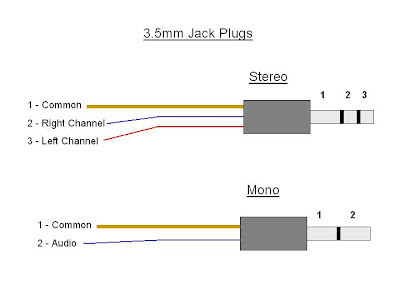 Sockets
There are four types of audio socket found on bat detectors and recording equipment:

1. Audio out (also labelled as headphone or speakers) is the socket on the detector or recorder which squirts out sound. The level is controlled by the volume control.
2. Line out (often labelled record) is the same as audio out, but with a steady volume, unaffected by the volume control.
3. Line in (also called audio in or sound input) is the socket on the recorder or PC through which the equipment receives audio.
4. Microphone in is similar to audio input, but is easily overloaded, as microphones produce very low level audio.

That's the geek stuff over. So, why does it matter? Most bat detectors are mono. As the two types of jack plug are interchangeable it doesn't really matter which we use. In fact it's helpful that they're interchangeable as it means stereo headphones can be used. A bog-standard stereo jack to stereo jack lead can be bought at Comet to connect the detector to a digital audio recorder, minidisc recorder or cassette recorder. Incidentally, avoid cassette recorders: the tape speed falls as the battery runs down, turning Common Pipistrelle calls into Nathusius' ones.

It's always advisable to connect the line out soocket on the detector to the line in socket on the recording equipment. That way, the machines take care of the audio levels and we can get on with looking at bats. Life being the way it is, some machines don't have these sockets, so we have to get a bit sneaky.

If there's no line in on the recorder then it's necessary to use the microphone in socket, taking care not to overload it by having the detector volume set too high. The recorder's automatic level control will cause the background white noise to increase when there;s no sound, but it should drop the moment a bat is picked up.

The Bat-Box Duet
Things get more complex when using a Duet. These are excellent detectors, allowing the user to listen to a heterodyne detector, whilst recording what the user hears and the sound from a frequency division detector, one on each stereo channel. This permits later computer analysis. Admittedly, the sonograms produced are not quite as perfect as those made with recordings from a time expansion detector, but they're usually good enough for most purposes and it's much easier to use (anyway, how many hobby bat-workers can afford to pay a grand for a time expansion detector?) 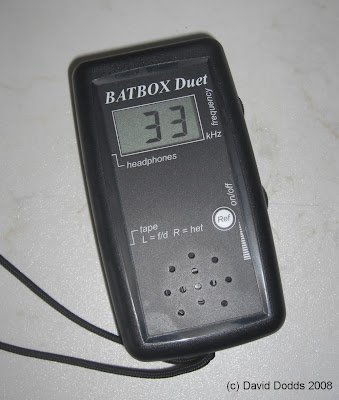 The Duet achieves it's cleverness by using the two stereo channels: left for the frequency division audio and right for the heterodyne audio. As long as the recording equipment is also stereo then a standard stereo jack to stereo jack lead can be used. However, some digital audio recorders only have a mono microphone input. If you put a stereo jack in here the machine will record a weird amalgam of the output of both detectors. A cable which splits the stereo into the two mono outputs is required - see below. You need to go to a specialist shop like Tandy or Maplin, or if you're handy with a soldering iron, make one yourself. 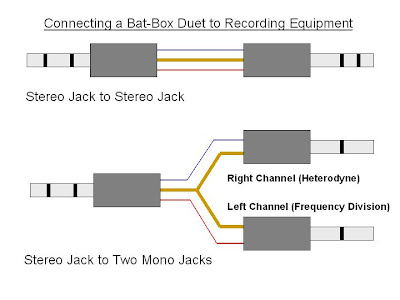 The other difficulty comes when you replay the bat calls into a computer. If you don't have a line in socket on your computer the microphone socket may work, but it will be mono, rather than stereo, so the same cable is required.

Incidentally, if you're buying a minidisk recorder for use with a bat detector, check the line in socket carefully. Most have some sort of audio input, even if there's no line in socket, but a generation of minidisk players exists where the line in socket is a weird digital thing which looks like a 3.5mm jack socket, but simply doesn't work, except to record from other digital equipment.

Of course, all this should soon be academic, as we move towards bat detectors with built-in memory cards. Hopefully that will make redundant the geeky knowledge I acquired from my youth, spent making dodgy cassette recordings of LPs......

The BCT have published a useful guide to recording with digital equipment: http://www.bats.org.uk/helpline/documents/Digitalrecordingwithbatdetectors_005.pdf

Finally, if you follow any advice here, you do so at your own risk.