Two steps up for bat monitoring?

I've written before about my hope that the rescue and revitalisation of Titley Electronics (makers of Anabat) would result in a shake-up of the market for unattended monitoring equipment. With Titley and Wildlife Acoustics (makers of the Songmeter) battling for the marketplace the winners will be those of us who use their equipment. With remarkable symmetry both companies have looked at their existing offer, listened to customer feedback and both are launching ground-breaking new machines. Interestingly they are also swapping places in the cost stakes.

Wildlife Acoustics appear to have addressed a lot of the issues with their SM2BAT with their new SM3BAT. With a die-cast aluminium case it will be more robust than the previous machine. They have also addressed problems with cumbersome access and risk of letting water inside the unit. The control and screen are now on the outside of the case, making them more accessible and the batteries now slide into slots in the side of the machine. 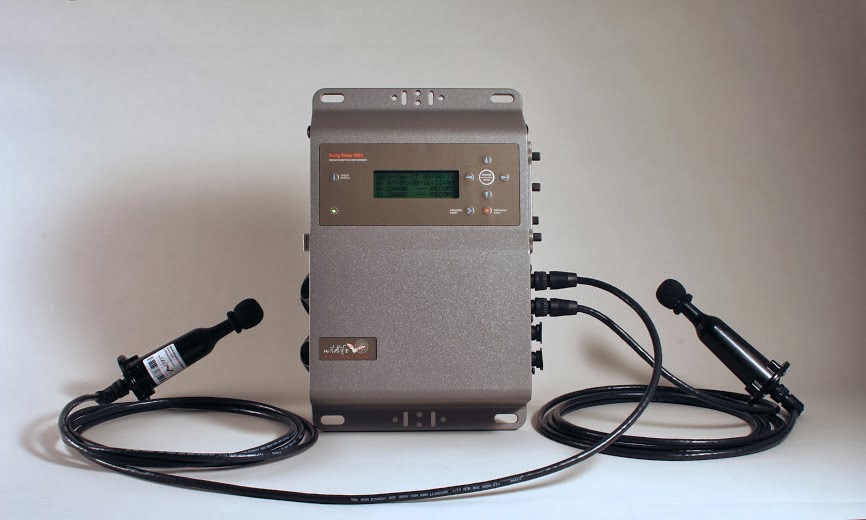 The Wildlife Acoustics approach of recording in ZCA (Analook) format as well as in compressed WAV (audio) format is strengthened by a massive increase in memory to a Terrabyte, allowing those large files plenty of room for a change. Another problem with the old SM2BAT was the vulnerability of the microphones and W.A. have a new and more robust microphone for the SM3BAT. They also claim an improvement in power consumption and there is no longer a need for an adaptor to use an external battery.

It all sounds very promising. The downside is that they have abandoned the £1000 including VAT price point to pay for the improvements and I understand the SM3BAT will market at £1500. The new microphones are also double the cost of the old ones at £200 each. A big increase, but maybe worth it?

Titley are countering by moving downmarket with their new Anabat Express. At just £500 each you could buy three of these machines for one SM3BAT (though the SM3BAT can record from two microphones concurrently, if required). 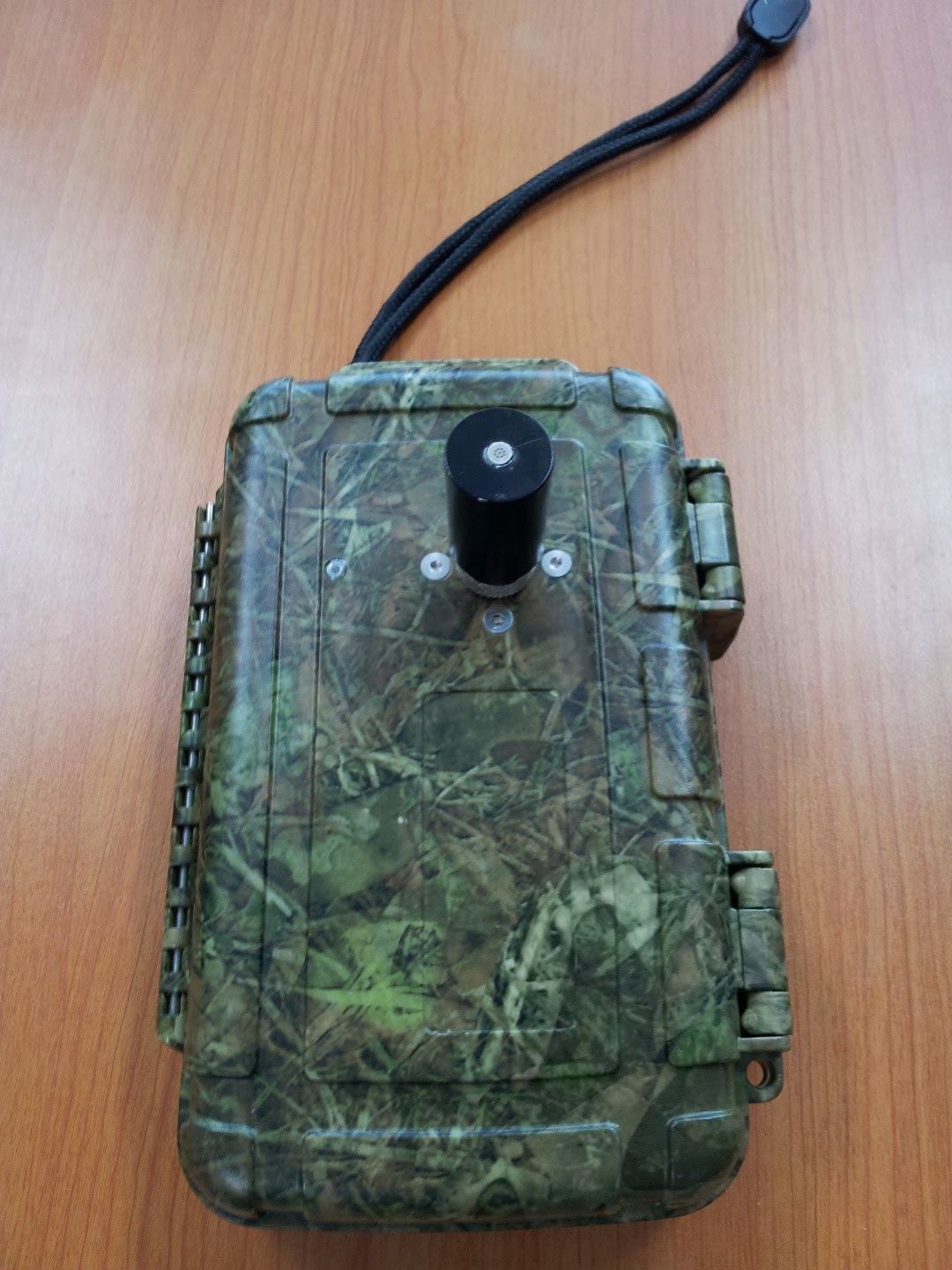 Compared with the older SD1 and SD2 Anabats the Express is very different and, like W.A. Titley have listened carefully to customer feedback. A key reason why people started buying SM2BATs in preference to Anabats was the the Anabat's lack of integral weatherproofing. The Express is built into a stout weatherproof case, screen-printed with camouflage. The case is little bigger than the original Anabat machines, making it rather smaller and neater than the SM3BAT. The older chunky Anabat microphones have given way to a new and smaller mic. Happily Titley have finally given up on CF memory cards, moving to the ubiquitous and smaller SD card (in fairness they had already done this with the Roostlogger).

Titley also claim a significant improvement on power consumption and the Express uses 4 AA batteries. Oddly in the SM3BAT W.A. have chosen to carry on using 4 large and heavy D cells. 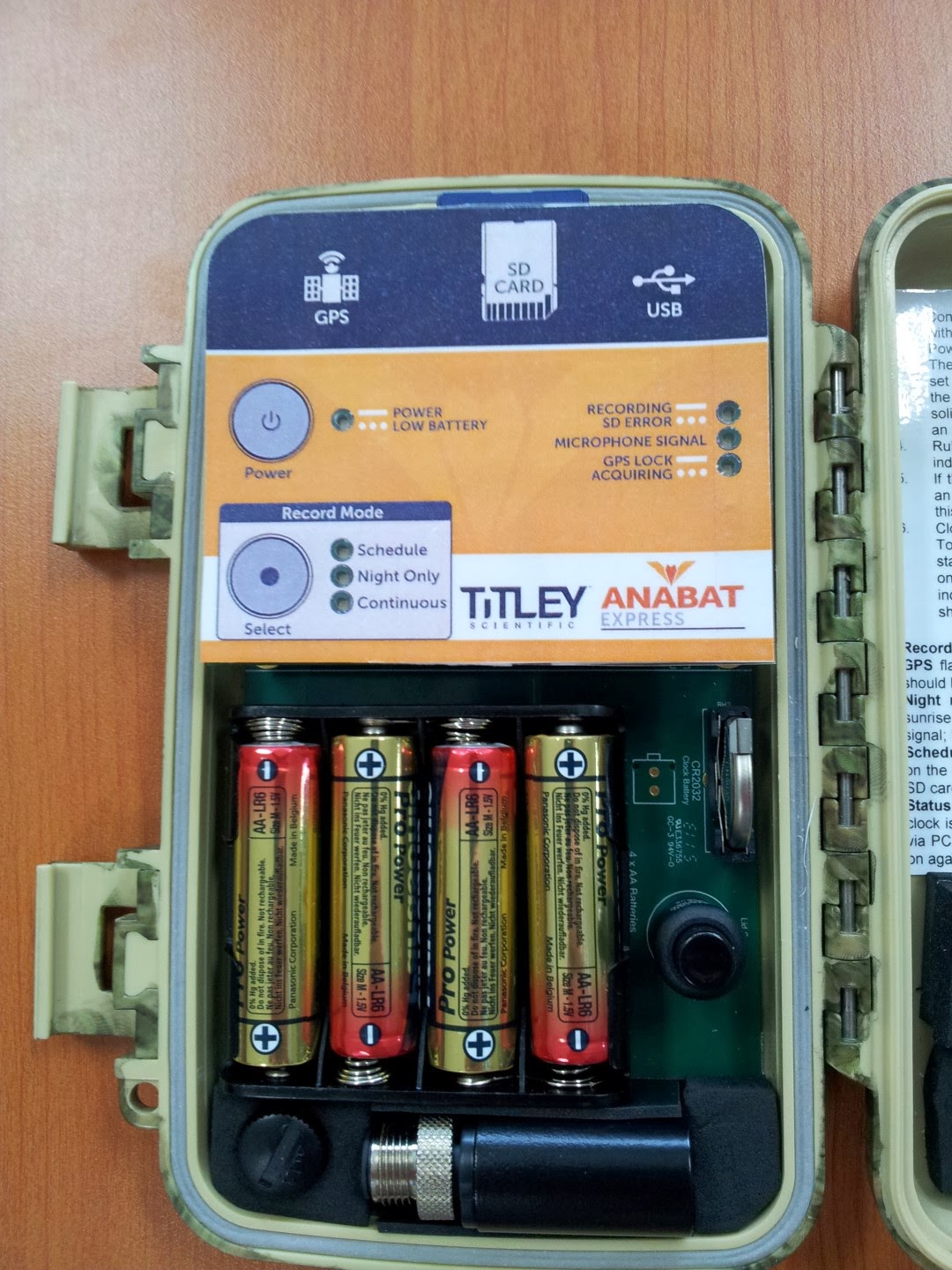 This interior view of the Anabat Express, with AA batteries in place shows how small this low-cost machine is.
(Photo copyright Titley Electronics)

The Express also has built in GPS for the first time. It's not really a hand-held unit, so the purpose of the GPS receiver is to allow the machine to calculate sunset and dawn times, making it possible to programme the machine to start and stop recording at times relative to these, rather than fixed times. This was always a strength of the SM2BAT, compared to the older Anabats, which require regular reprogramming through the season.

It's great to see both companies listening and innovating and it will be interesting to see what these two new machines are like in practice. W.A. have a habit of making equipment complex to use in the field, which is fine if you're a bit of a techno-geek, but more of a problem if you're just an average bat worker. Titley's previous machines have always been relatively user-friendly, though the manuals for their previous models have been unintelligible! Whether all these innovations deliver the goods remains to be seen. Happily both manufacturers have been kind enough to offer me machines to try out.

On paper it looks like W.A. are aiming for the gold standard with the SM3BAT, though it's costly and more visible, therefore potentially vulnerable when left in the field. The Anabat Express, with its low price-point could be bought in quantity and its small size and camouflaged appearance makes it potentially less vulnerable. If both machines live up to their promise it could be a case of "horses for courses". For long-term placement on a wind farm Met mast the SM3BAT could be ideal. For large scale deployment over a site the Anabat Express could fit the bill. Time will tell...

Visit our website:www.daviddoddsassociates.com
For regular updates follow us on LinkedIn & Facebook
(David Dodds Associates Ltd) or on Twitter (@DavidDoddsAL)
Posted by David Dodds at 21:04 No comments:

In my work I meet many bat roost owners, varying in attitude towards "their" bats from delighted to appalled and all points in between. I also encounter many people who are commissioning a bat survey because they have been obliged to do so. Often in the UK this occurs when someone applies to their local authority for planning consent to carry out work on a building. The law requires the local authority to consider protected species, so if there is any possibility for a bat roost to be present a bat survey must be carried out. "I know there aren't any bats there, but we have to have a survey" is often the client's opening gambit. It's not an unreasonable attitude: what little most people know about bats leads them to expect them to be highly visible, extremely rare and likely to roost in caves or gothic castles. Against that background it seems insane for a local authority to request a bat survey of a three bedroom suburban house, a 1970's primary school or a city centre council flat. Yet I and my colleagues frequently come across bat roosts in buildings like these. 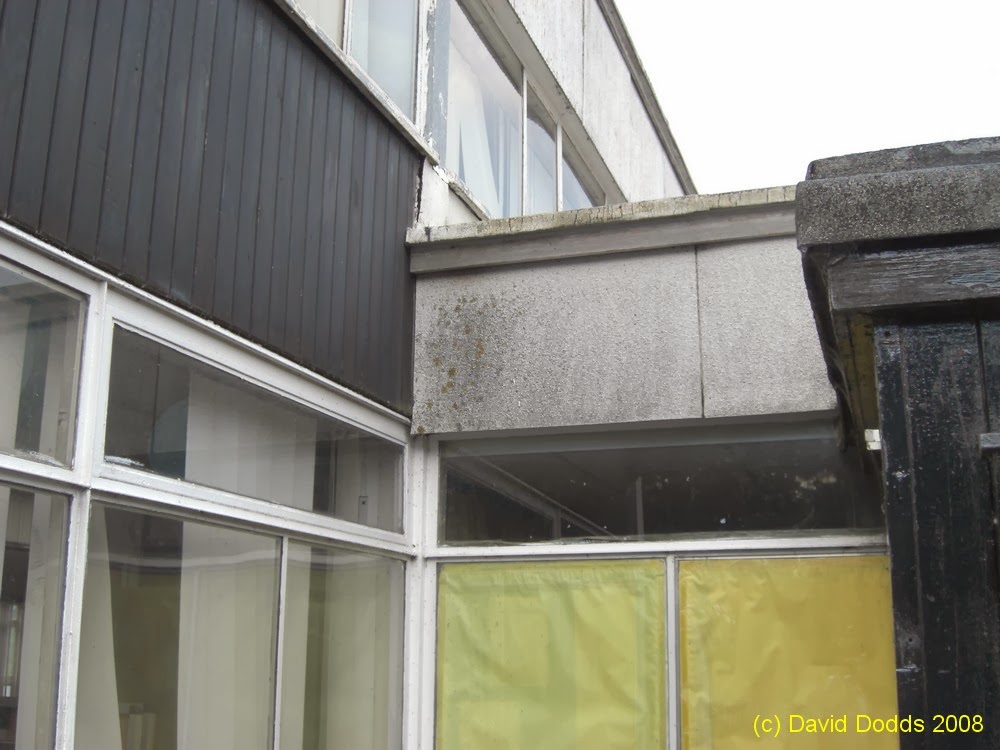 This modern primary school is home to 280 Soprano Pipistrelles. They roost alongside the main entrance and most people think the noise is made by nesting birds.

Part of the problem is one of perception - bats are rare, that's why they're protected. Yet some bat species are very common. Here in central Scotland Soprano and Common Pipistrelles and Daubenton's Bats are all common, but have the same level of protection as rarities such as Whiskered Bats or Nathusius' Pipistrelles. Rarity isn't the sole reason for protection - vulnerability is a key issue. Our commonest species (in central Scotland), the Soprano Pipistrelle gather in their hundreds and even thousands to breed. The destruction of one of these roosts could harm the species over a large area. Bats reproduce very slowly - a single female will often only have one offspring in a good year and the need to gain weight swiftly in order to survive hibernation means that many do not survive. Thus bats are usually slow to recover from set-backs. Reducing prey availability caused by pesticides, illegal roost destruction through prejudice and stupidity and a host of other factors all combine to make legal protection essential.

Another factor in the misconception is the expectation that bats are visible in their roosts. We have Hollywood to thank for that. People expect to glance inside an attic and see a host of bats hanging from the ceiling, with their wings wrapped around their bodies. In the case of Horseshoe Bats that genuinely is the case, though bats tend to be a great deal smaller than they appear to be when in flight. Most other bat species in the UK roost in holes or crevices of one type or another, meaning that when they roost in buildings they are less likely to be visible to the uninitiated. Not long ago I surveyed a farm, the owner of which insisted there were no bats around his farm. Not only were there three species of bats roosting in his farm, there was a colony of about 80 Common Pipistrelles roosting alongside his bedroom window. 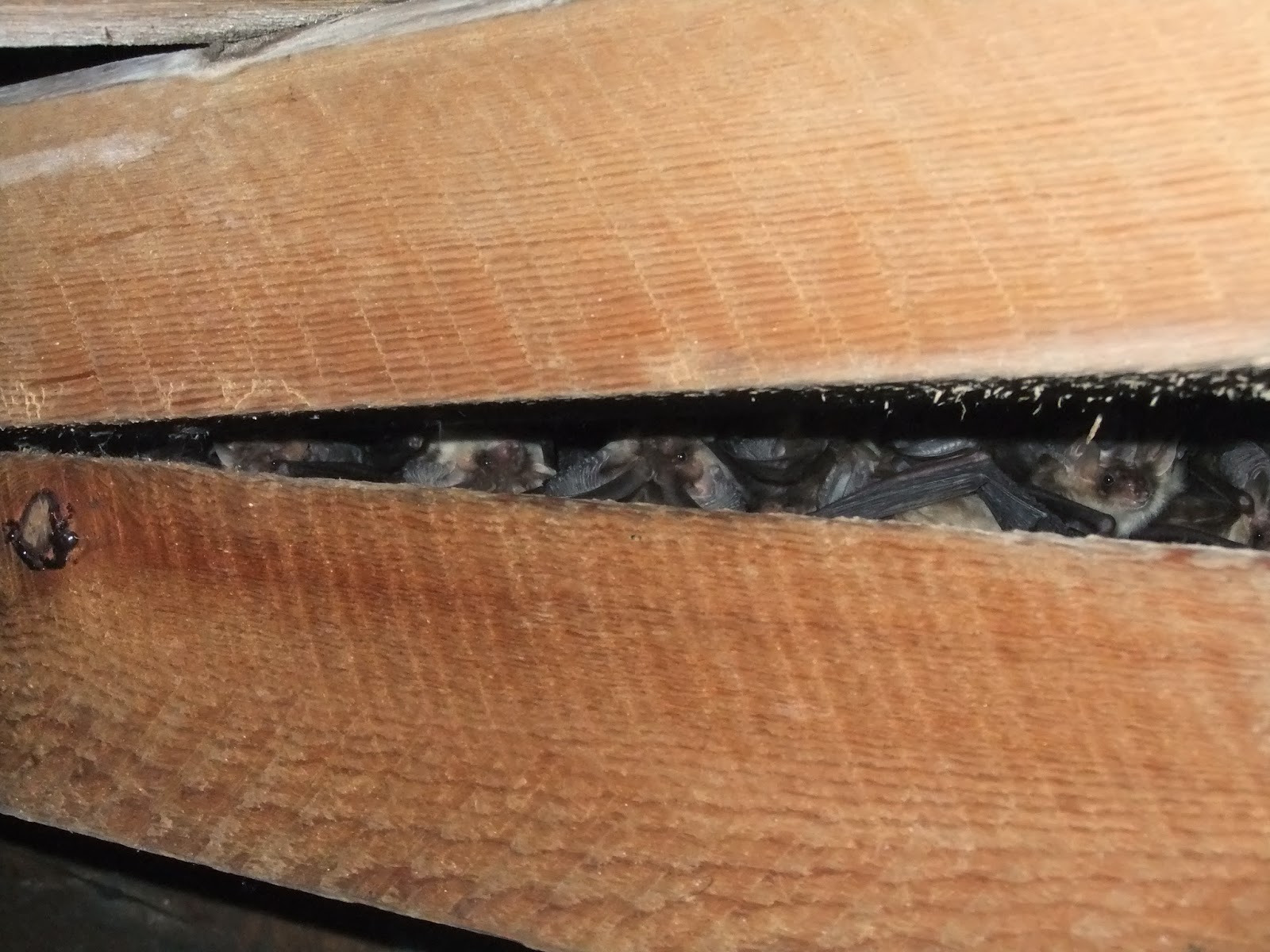 This colony of Brown Long-eared Bats are tucked into a crevice between two roof beams. If disturbed they tend to move deeper into the crevice, out of sight.

I'm not sure where the popular conception that bats only roost in old buildings comes from. It's certainly true that large country mansions and castles usually do contain bat roosts, but this often has as much to do with the presence of undisturbed spaces and the maturity of surrounding habitat as anything else. Modern house builders are surprisingly good at including loose-fitting fascia boards, poorly attached flashing and many other features which bats find to their liking and it is usually in modern buildings that people are particularly surprised to find bats. 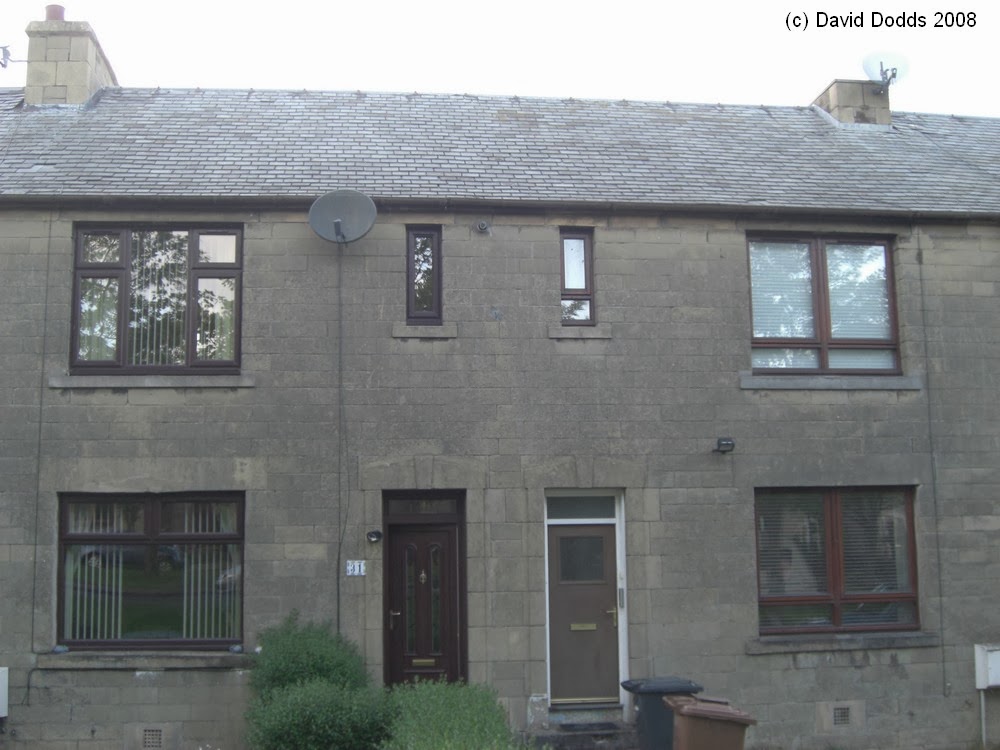 Not a building which fits with the popular vision of a building used by roosting bats, but 800 Soprano Pipistrelles roost under the slates of this house every summer.

I have no doubt that there are many buildings around the country containing bat roosts that the owners are unaware of. Either they don't notice the signs or don't recognise them for what they are. Two years ago I spent a couple of weeks flying (when I'm not working with bats I fly gliders) from an airfield in Leicestershire. The club house there is a single-storey, L-shaped building about five years old. In the shelter of the L-shape are comfy tables and chairs, accessible from the bar. It's a nice place to sit on a summer evening and is well-used by club members. I had only been there a couple of days when I realised that a colony of Common Pipistrelles were roosting  at the wall-head alongside these tables. Each evening as the sun started to go down around ten bats would emerge and fly through the group of people who were sitting drinking and chatting. Nobody ever noticed them! I suspect people occasionally glimpsed a bat and assumed it was a songbird. The club management were entirely unaware of the presence of a bat roost in their recently-build clubhouse. If they applied for planning permission to change it and were asked for a bat survey I expect they would be astonished and annoyed at being asked to commission a bat survey...