I came across this wonderful piece of writing by Verlyn Klinkenborg, originally published in the New York Times. It really captures the essence of dawn and dusk outside a bat roost.

It's 6 a.m., a dark, gray morning in late August, the dim light a reminder how far we've gone on the downhill side of summer. Ethel, a border terrier, and I are behind the house investigating a woodchuck scent. There is a dark smudge in the mist above us, and then another. The bats are returning to their bat house, a thin, slatted box, high up under the eaves. Each bat comes in over the roof, makes a dive for the ground and then swoops upward toward the narrow entrance of the bat house. Some slip inside on the first try, some fall back and try again. After a few minutes, the air is still, the last bat home. Ethel and I turn toward breakfast.

I have seen the bats come out at evening again and again. It is one of the joys of living here, watching them drop one by one into the night. But I've only seen them coming home a few times. The bats of evening are the last flutter in a world that is growing still. The bats of early morning have already been engulfed by birdsong, rooster-crow, the stirring of nearly every creature on this place. Their flight is less erratic just before roosting, no longer distracted by an insect in the air. It's as though each bat brings a scrap of night's darkness home with it, leaving the sky pale and brightening. It's as though night itself were being stored in the bat house till dusk.

When the last bat had vanished, I felt almost absurdly alone, strangely vacant in that thin slice of morning. It reminded me of a feeling from the city a long time ago - that moment, after staying up all night, when you can feel the world gathering pace and energy just as you're beginning to fade. Watching those dawn bats, I imagined them punching out of their night's work as they settled, and I felt as if I'd somehow clocked into their schedule. And it seemed that the best use of a dark, gray morning with mist in the air was to go back to bed, only a few feet, and a couple of walls, away from where the bats are sleeping.

(Normally I have a thing about horrible US English spelling, but writing this good deserves to be left as the author intended!)

Your comments: mailto:blog@plecotus.co.uk
Posted by David Dodds at 20:37 No comments:

Ok, that's maybe overdoing it a bit, but I have recently become a fan of the Anabat SD1. For some time now the SD1, and it's more cumbersome predecessor the Anabat II (with ZCAIM recorder) has been the industry standard equipment world-wide for passive monitoring, and rightly too, but having spoken to several people who rated it highly as a detector for use on transect surveys I though I'd better try it out.

There are several reasons the Anabat is so good for passive recording. Alternative methods of recording bat calls use audio formats such as .WAV or .MP3, which quickly gobble up available memory in just a few hours. The Anabat records each bat pass as a series of co-ordinates, plotting the loudest frequency every few milliseconds, creating miniscule data files, allowing many thousands of bat passes to be squeezed onto a single 1Gb CF memory card.

The fact that the memory card is held within the detector is a further advantage, but the biggest advantage lies in the way the detector ignores the spaces between bat passes and simply records each bat pass (or other ultrasonic noise) as a new file. The Analook software which comes with the machine allows you to very quickly scroll from bat call to bat call, identifying each pass and creating a spreasheet showing each one, with date, time and species. The time saving, compared with using other software analysis systems, such as Batsound or Batscan is huge.

So the Anabat is great as a passive detector - why is it good for transect work? The designer, Chris Corben, has built in an interface which allows a GPS receiver to be plugged into the detector. Every two seconds the Anabat asks the GPS where it is and records that data on the CF card, alongside all the bat passes it records as you walk along. This means that for each bat you encounter you have a sonogram of it's call, the date, the time and an accurate grid reference. 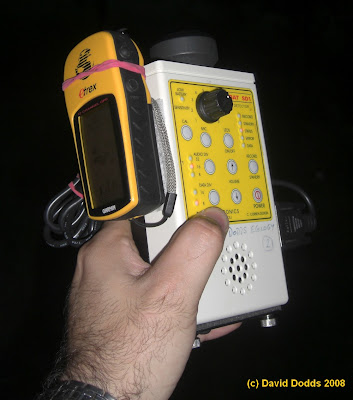 Anabat SD1 with Etrex GPS velcroed to it and connected.

What more could you ask for?

Well, I've made it sound great, and it is, but there are plenty of problems too (though apparently Titley Electronics, who make the machine have recognised that there is a huge market for the machine and are working hard at improving it):

1. The GPS data isn't attached to the sonogram: you have to transfer it manually.
2. Even with the GPS and Anabat both set to the correct time, an error of one hour creeps in, though it's easily edited out.
3. Becasue the machine is built in Australia, the GPS data is recorded as Latitude and Longitude, using the WGS84 datum, instead of the British OS datum. This means you have to use a utility programme to convert the data to British National Grid and remember to convert the datum, otherwise you can end up with proper-looking grid references, which are simply wrong.
4. The standard Anabat microphone is not as sensitive as it could be. I set the Anabat's sensitivity control as high as it could take and used it alongside a Bat Box Duet. The Duet was clearly more sensitive, which was disappointing, given the Anabat's £1,400 price tag.


Despite all the above, Anabat plus GPS is still streets ahead of anything else currently available. When used together with the GPSU GPS utility programme and the superlative DMAPW mapping programme, bat data can be identified and transferred to a map with incredible ease and efficiency. Unlike Victor wotsit, the chap who was so impressed with a shaver he bought the company, I didn't go that far, but three weeks after buying an Anabat for passive monitoring I'd bought another for transect surveys, despite the high price.
It's worth mentioning that you can buy an SD1 with a PDA mounted on the front and a GPS plugged into the hand-held computer. This allows you to see sonograms live and also tags the GPS data onto each bat pass as it records it, which is a fabulous toy, but of questionable value.

I was on the receiving end of a hard sell for this system at the Welsh Bat Conference and failed to understand why I would want to pay an extra £400+ for this. Titley admit that the PDA screen will cause you to lose your night vision and advise that you should carry it, pointed away from your eyes! The bracket looks utterly Heath Robinson and vulnerable. When I pointed this out I was told that the bit which would break if you tripped whilst carrying it would be the bracket, the cheapest part...at £100!

In fairness to Titley and to Chris Corben, this is an excellent idea and has immense potential. Why plug your bat survey data into a computer when you can take the computer to the bats, but there's a lot of work to be done yet. Meanwhile, like many others, I am waiting with baited breath for the new Batbox Griffin to be launched. It just might beat Anabat at their own game.

And of course, my website: http://www.plecotus.co.uk/
Posted by David Dodds at 19:38 No comments: 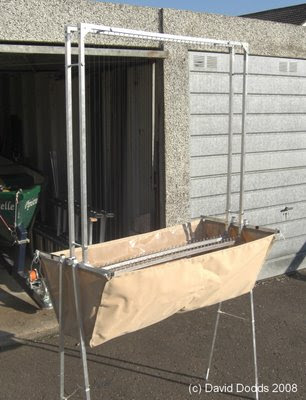 A couple of times this year I have described my Tuttle (or harp) trap, built with the intention of creating an effective trap for harmlessly catching live bats, but smaller and more versatile than the commercially-available traps. Cheaper too! (see The Kitchen Table Harp Trap, February 2008).
Back in May I described the trap's first outing, when it was unfortunately placed over a roost entrance which wasn't in use. (See A Bat in the Hand, May 2008). As the bat maternity season started soon after that I had to wait with gritted teeth for the breeding season to end, so I could find out whether the trap worked or not.
A couple of weeks ago Lothians Bat Group had a trip to a site in the Borders and I set the harp trap up at the entrance to a Daubenton's Bat (Myotis daubentonii) roost and waited with baited breath. With 8 or 10 people waiting to get a close-up view of the bats, I couldn't help dwelling on the fact that the wretched gadget had yet to catch a bat - talk about pressure!
The first 2 or 3 bats flew past the trap, finding ways around it or even through it, causing a sweaty brow on my part. However, this is always a problem with harp trapping at a roost, so after a little work closing the gaps with coats, twigs and anything else that came to hand my fingers were re-crossed.
I got involved in a conversation and missed seeing the first bat to be caught, but yes, a bat was actually caught. My week's hard work back in the winter wasn't in vain after all! It quickly became apparent that the plastic lining of the catching bag was too long, which slowed the bat in moving into the sides of the bag, where it could not get out. In all, twelve Daubies were caught and I was able to check several of them for parasites, watched by some Group members. At the same time, other members of the Group were able to gain some valuable bat handling training. 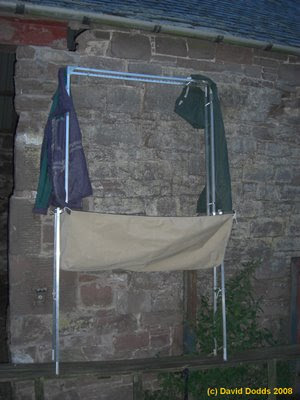 The trap in place at the Natterer's roost (the roost is in a crevice in the wall behind)
Now that I knew the bat worked I followed up with an evening at a newly-discovered Natterer's Bat (Myotis nattereri) roost in the wall of an old farm steading, where I needed to confirm how the roost was being used. Again, the trap did it's thing and I was able to catch five bats (although a sixth was caught as I was taking the trap down). With three adult females, a juvenile male and a juvenile female, I was able to conclude that this had been a maternity colony, with the young bats now flying and the trap had earned it's place. 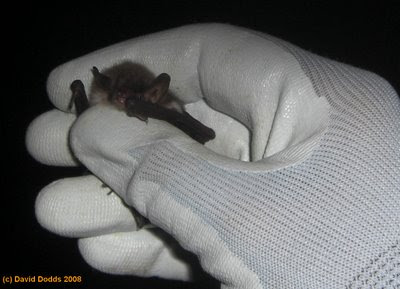 Before I next use the trap I'll trim back the plastic lining. The only other problem that has come to light is that the legs are a bit spindly and wobbly. The trap is light in weight, so the legs don't need to be too strong, so I'll delay making any changes to that for now. But at last, eight months after building it, I know the trap is fully functional and effective.

Please note, everything described above was carried out under appropriate S.N.H. licences. Trapping and handling bats can be harmful to them if not done with the correct equipment and skills. To do so without a licence is a criminal offence.
Keep up to date with the latest posts Facebook.com/Davidsbatblog
Posted by David Dodds at 19:02 No comments: