I first bought a Peersonic bat detector in 2014. Having tried it out I rapidly bought a further seven and I’ve just ordered another four. So what is it about this detector that makes me part with money so willingly, in a world which is increasingly cluttered with bat detector models and (in the case of at least one manufacturer) some quite vocal marketing? 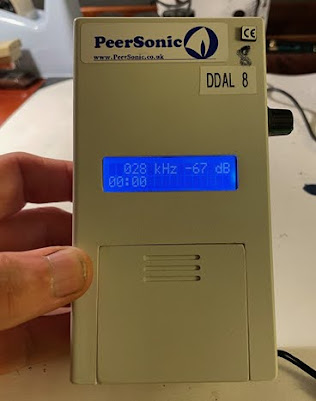 When you first pick up a Peersonic RPA3 (the current model) it doesn’t scream “Buy me, use me, I’m a really good detector.” In fact, it looks unprepossessing and, if appearance is a factor in your choice of machine you’ll probably walk away and look at some of the many shiny, well-marketed options available from Anabat, Wildlife Acoustics or Elekon.

Bats, as well as occupying a lot of my spare time are also my profession, so, whilst professional image is important, functionality is what really floats my boat when we’re buying sets of detectors for our team to use. Do we want fancy colours or gadgets? No. Do we want visible sonograms to distract our team members from where we really need them to be focussing - the building they’re surveying? Of course not. So for our purposes the bland cream case of the RPA3 is absolutely fine. (By the way, our supervising ecologists are mobile around our survey sites with machines which DO show live sonograms).

So what does it do? Well, it records full-spectrum WAV sound, whilst allowing you to listen to frequency division or tunable heterodyne output. The optional date and timestamp module does exactly what it says on the tin. Recording is to an SD card, mounted internally and the unit is powered by three AA batteries and we’ve seen no evidence of it being power-hungry.

The screen is small, but displays sufficient information to be useful. It displays the menu items as you scroll through using a rotary knob on the side (which also doubles as the heterodyne tuning control) and a button on each side for enter and back. When in use it displays the peak frequency of the sounds currently heard – useful for on-the-hoof Pipistrelle species ID, it also gives an amplitude reading in dB, which I don’t find too useful, though the matching bar-graph is handy. You can choose to record bat passes manually or automatically and in the latter mode the screen is blocked for a moment or two whilst the machine finishes the recording, which can be mildly irritating. 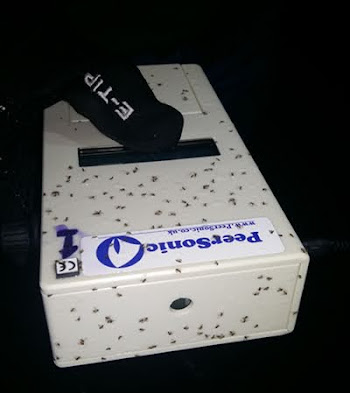 You’ve got to be tough to do bat surveys north of the border – an RPA3 in action, with hundreds of hungry Scottish midges.

In use we’ve found the detector to be as sensitive as most other detectors currently available and more so than some. It fits nicely into the hand, depending I guess, on the size of your hands. The case has a wrist-strap (yet ours still get dropped occasionally. Go figure.) and a threaded hole on the rear, which allows tripod mounting, if you’re so inclined (Peersonic also make a static monitoring version, which utilises this).

The ability to switch in use between FD and Het. is useful, especially when supported by the peak frequency indication. We tend to use FD mostly, but when Pipistrelle foraging activity is high, the ability to switch to Het, and listen for later-emerging species by tuning down to around 35-40kHz is handy (possibly less so in areas with a broader species assemblage than Scotland). As the machine records in full-spectrum, regardless of what mode you are listening in, this gives a measure of security from missing anything inportant.

One possible weakness, depending on how you use your detector is that the RPA3 lacks a loudspeaker, so you use headphones. Purists will tell you (rightly) that this is the best way to listen to bat calls, if you want to hear them clearly. However, I’m not a purist and I’m not keen on random, possibly dodgy people being able to sneak up behind our surveyors at night. We also like them to be able to hear their two-way radios, so headphones don’t work well for us. And this is where another factor comes into play. Peersonic is a UK-based company, run by engineer, Peter Flory, who isn’t just willing to help with random requests, he positively seems to relish them. So our machines were modified by Peter to work with mono earpieces, rather than stereo headphones.

We have now racked up several thousand surveyor hours using these machines and we’ve really only had three problems, all of which were easily rectified. Firstly, if a machine is dropped (which you really shouldn’t do, but hey, it’s dark, it’s cold and we’re tired…) it will sometimes stop working. However, the fix for this is easy, as it is simply caused by the internal SD card being dislodged. Undo two screws, pop it back in and you’re back in action. We’ve had a couple of machines ‘skipping’, when moving through the menus. This turns out to be caused by the nut on the rotary knob being too tight and slackening it slightly resolved the problem. 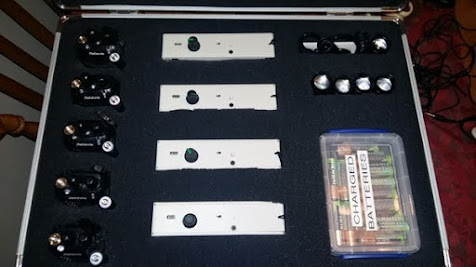 One of our survey kits, ready for use with personal radios, torches, batteries and four RPA3 detectors

The only other issue we’ve had was a case cracking slightly around the battery compartment. The problem here was that the battery holder grips the batteries tightly, so we tend to lever out the AA batteries, putting a strain on the case. One of our cases developed some cracks after this had been done a few hundred times and had to be replaced. It’s the only one though and at about £40 it didn’t exactly break the bank, which raises another angle on Peersonic. In an age of built-in redundancy and frequent upgrades Peter assures me that the RPA3 has been designed to be future-proofed and repairable.

So to sum up, the Peersonic RPA3 is a sensitive and effective bat detector, doing everything you need for commercial bat surveys and, but I’ve saved one factor to the end. The price: At the time of writing, Peersonic retail the standard RPA3 at just £245 + VAT and carriage. I’ve told Peter he could and should double that price, but he’s committed to making the machine freely available - for bat group or casual use this is a lot of bat detector for an affordable price. So whatever you do, don’t overlook Peersonic, just because there are shinier machines out there, made by companies with bigger marketing budgets.