Ignore the gods of bat-work at your peril.

It's been a while since I wrote a blog post, but I am increasingly worried that many-up-and coming ecologists are unaware of a vitally important aspect of professional bat-work, which I need to correct.

I’ve never been particularly superstitious, but when I realise that the bat survey season is beginning to loom I tend to reach for the cuddly toy bat which sits beside my desk, and give it’s belly a little rub. I’m a firm believer that bat surveys are governed by a set of especially capricious little bat-gods, with many gremlin-esque tendencies, always on the look-out for reasons to trip us up. 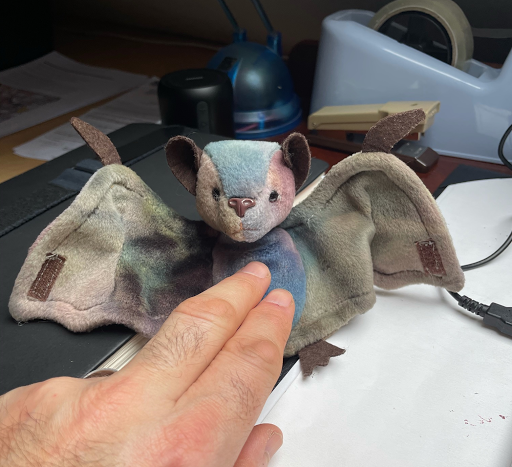 Never underestimate the importance of this aspect of pre-survey preparation

Nobody really knows how many bat-gods there are, or what they are called, but they appear to have divided the work of a bat-worker up between them, so whatever the circumstances, never doubt that there is at least one bat-god keeping an eye on you and waiting to screw up your survey.

The first thing to know about the bat-gods is that they hate being taken for granted. “This should be a good site for bats” will always be taken by them as a challenge and at best you will spend two hours watching a lonely moth slowly fluttering around. But if you were especially enthusiastic, they may get sufficiently irate to cause a group of neds to turn up on your survey site. The best way to avoid this is to start every survey by saying, very clearly “I DON’T THINK THERE ARE LIKELY TO BE ANY BATS HERE.” The bat-gods, appeased, will then go looking for some other lonely bat-worker to bother. Unless, that is, you commit some other sin that offends them.

Another thing which which will bring the ire of the bat-gods down upon you is the appeasing of clients. If the client should show up during your survey, asking how it’s going (often a distracting event in itself), you will be tempted to tell them something positive, perhaps indicating that the survey is going well. Resist that temptation at all costs! The bat-gods, hearing you, will immediately plot some mischievous vengeance on you for failing to recognise their all-powerful position. In such a situation they will gather together in a little huddle and negotiate amongst themselves as to which bat-god will have the enjoyment of making their displeasure plain to you.

·        The wee fat sleepy bat-god, who is in charge of making it bloody hard to get up for a dawn survey.

·        The mischievous bat-god of barked shins, who skips around the survey site, merrily scattering trip-hazards.

·        The bat-god of annoying neighbours, who uses a crow-bar and a cattle-prod to extract nosey old buggers from their comfy arm-chairs and out to interfere with your survey.

·        The bat-god of batteries uses a long straw to suck power out of your detector battery, which is why your freshly-charged battery still doesn’t last to the end of the survey

·        The bat-god of padlocks plays with the minds of site owners and managers, to ensure they forget to arrange access for you.

·        The bat-god of weather has more ways of messing with you than you can imagine, but he’s especially fond of hail in July.

·        The bat-god of lost kit delights in hiding thermometers, notebooks etc. so they are left behind at the end of the survey.

·        The bat-god of urban surveys is a particularly nasty little god-let, who has at his beck and call hordes of snotty-nosed horrors specially trained to demand to know what you’re doing and why.

·        I’m happy to say I haven’t had to deal with the bat-god of car batteries for a while, but this is because I always remember to say at the end of a successful survey “I hope my car starts!”