There are bat detectors...and there's the SSF Bat2

For some time I have been wondering what the next steps in bat detector technology would be. For a while it looked as though it would be the long-awaited Bat Box Griffin: heterodyne, frequency division and time expansion in one unit, with in-built recording. That may well prove to be a world-beating piece of equipment, but it's launch has seen many delays (though in the 21st century it's nice to see a manufacturer which respects its customers enough to perfect a product before launching it...Microsoft Vista comes to mind).
Last year the Italian Dodoultra promised digital processing and many clever features. Possibly they were delivered but it really didn't matter as the detector was woefully poorly designed in terms of ergonomics and usability in the field. The Dodoultra's manufacturer ignored two simple facts of bat detector design: bats move around fast and they do it in the dark. Detectors need to be easy to use and swift to change function. The Dodo delivered neither and followed it's namesake.
So when I heard of a new detector from SSF in Germany with clever functionality I was cynical, to say the least. However I am a sucker for new toys and so 160 Euros was spent on a shiny new SSF Bat2. Note that price: 160 Euros, delivered from Germany is good value for a decent quality heterodyne detector. But the SSF2 isn't just a decent quality heterodyne detector, it turned out to be rather more than that. 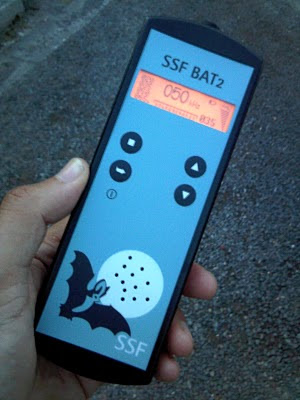 If I were to ask what are the major drawbacks of using a heterodyne detector, compared to say and £1800 Anabat+PDA you might say these:
1. The hassle of tuning up and down in order to find bat calls.
2. The difficulty of identifying the peak frequency of a brief bat pass.
3. The risk of missing a bat because you're on the wrong frequency.
The Bat2 display shows the frequency the detector is tuned to, as you might expect. But it has three other displays. Firstly, there is a second frequency display, which shows the peak frequency of the bat call you are listening to. Hit one of the four buttons on the front of the detector and the detector jumps to that frequency (and unlike the Dodoultra, which also included this function, it works properly. The Dodo had a tendency to latch onto harmonics, instead of the main call). Pipistrelles and other frequency-critical calls can be swiftly tuned to peak, even during a brief pass.

All heterodyne detectors have the problem that they only receive a limited range of call frequencies at one time. How broad a range depends on the individual detector, but between 5 and 20 kHz is usual. Of course this means that, if you are tuned to 20kHz, listening to a Noctule and Greater Horseshoe flies past you are going to miss it. The Bat2 includes a small graph on it's display, showing the frequency range of the received call. In theory this means that you can see that Greater Horseshoe, though you would have to be walking about staring at the display, which means you're not going to see any bat behaviour and will probably trip over a tree root. Nonetheless it's a handy function.
The Bat2's tuning is controlled by up and down buttons on the front. If. like me, you like the thumbwheel tuning on the current generation of Bat Box detectors you may view this with the same suspicion that I did. It turned out to be surprisingly usable, even one-handed (as every chiropterologist knows, bat surveys require at least three hands). Cleverly, the detector has four user pre-set frequencies which can be jumped to by pressing a button, thus removing the tedious need to c=tune from one end of spectrum to the other.
All good stuff so far, so what's are the downsides? Well, apart from it only being a heterodyne detector (and surely that graph indicates that this machine must be processing frequency division internally? Couldn't it have an FD recording output?) the only complaints I have are very minor. The battery compartment is held shut with a small Phillips screw. Nice and secure, but hardly the game you want to be playing in the dark at 2am when the batteries run out.
My other niggle also relates to the batteries. It uses 4 AA batteries, which makes it a little heavier than other detectors which use 9volt PP3 batteries, but not enough to be a problem. I found that the battery indicator read low as soon as I inserted a fresh set of batteries. It took me a while to realise that rechargeable batteries only deliver 1.2volts, compared to the 1.5volts of a dry cell. Thus, the Bat2, when presented with rechargeable batteries registers low battery, regardless of the state of charge.
All in all I am delighted with my Bat2 and for the time being it is my detector of choice for watching bats, though for anything where I may need to review calls later I'll still use an Anabat+PDA or a Bat Box Duet and digital recorder. Please SSF...bring out a frequency division version...oh, and a handbook in English would be nice.
SSF website: www.all-about-bats.net
My website: www.plecotus.co.uk
Posted by David Dodds at 21:36