Last September I spent a night outside a disused lead mine, with fellow bat-workers from Lothians Bat Group and Dumfries and Galloway Bat Group. Our goal was to find out whether any autumn swarming activity took place and to catch any swarming bats and examine them for ectoparasites. As a licensed trainer I would also use this as a opportunity for bat license trainees to gain some experience handling bats.
The site was high in the hills of Dumfriesshire and as the sun went down it was a beautiful, calm evening. The mine had two access points: a ventilator on the hill above us and an addit (a horizontal shaft) leading into the mine. We blocked the ventilator with rubble netting, to ensure that any bats inside the mine would leave by the main entrance and set up my harp trap across the addit (see "The Kitchen Table Harp Trap", Feb. 2008 and "Happy Harp Trapping", August 2008). 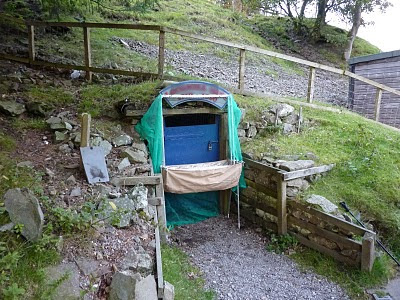 The harp trap in place across the mine entrance, with rubble netting at the sides and below, to prevent bats from flying round the trap.
Our hope was to find that the mine might be used by Myotis bats (which in Scotland means Daubenton's, Natterer's and Whiskered) as a swarming site. It has suitable characteristics to be used as a winter hibernaculum and swarming bats had been recorded there the previous autumn. Myotis bats tend to gather in the middle of the night during August, September and October and fly together. It's not clear why they do this, but mating is probably involved, as males tend to remain around the sites and females commute in from surrounding areas. It may also be connected with checking access to a hibernaculum or showing the site to juveniles. John Altringham's team at Leeds University have been researching this for some time, revealing some fascinating insights (see "Untold riches of swarming bats", April 2008).
Soon after sunset a bat flew into the trap from within the mine. It was an adult male Daubenton's Bat (Myotis daubentonii). Sadly (for me, not the bat) it had no ectoparasites, but provided good handling experience for two trainees. This was fortunate as it turned out to be the only bat that we caught... 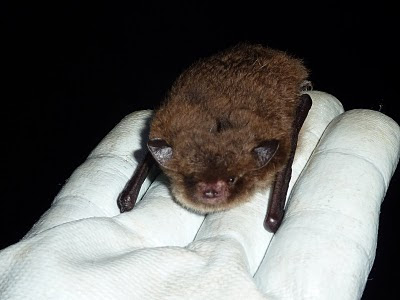 The adult male Daubenton's Bat we caught, before the temperature dropped.
As autumn swarming is an all-night activity we started the evening sitting around in folding chairs, for all the world like a group of picnickers, with positive thoughts about spending the entire night there. Then it started to get colder....and colder. Soon it seemed like a good idea to erect the gazebo someone had brought. Then we added the side walls. Then the sleeping bags and blankets came out! 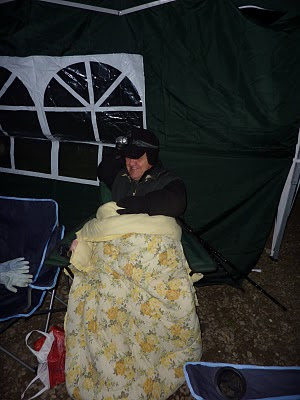 Dr Stuart Smith demonstrates the right equipment for bat-work in sub-zero temperatures.
Common sense told us we should give up. After all, with the thermometer at just 2 degrees there wouldn't be any bat activity would there? Actually, yes there was. Two bats had been swarming around the front of the mine fairly continuously since not long after the Daubenton's was caught and released, but were not tempted into the trap. From the bat detector we could see they were Myotis and their relatively faint calls made me suspect they may be Natterer's Bats (Myotis nattereri), but without catching them we couldn't be sure. Possibly they were males, awaiting females arriving from elsewhere. If so then they were destined to be disappointed...as were we!
Eventually, after many hours, when the thermometer descended below zero we concluded that the female bats had more sense than us, or the males, and had stayed home! We packed up and followed their lead. The next day I tuned in to the TV weather forecast in time to hear the forecaster say that the previous night was "the coldest September night for decades".
Important note: In the UK (and other European countries) it is a criminal offence to catch, handle or disturb bats without a license issued by the relevant SNCO (Scottish Natural Heritage, Natural England etc).
Keep up to date with the latest posts Facebook.com/Davidsbatblog
Posted by David Dodds at 12:01