There's Nowt So Queer As Folk...

...whom you meet on bat surveys.

Back in May 2008 I wrote about some strange occurrences during bat surveys (What is it about bat surveys? May 2008). It sometimes seems inevitable that if you meet someone during a survey, there will be something less than normal about them or their activities. I thought it was time to update you with a few of the odd characters I have met and strange situations I have found myself in since then.

Sometimes you meet regular-seeming people, who turn out to have a secret. I was recently setting up a survey in a rural area when a farmer stopped to ask if we needed any help. You know you're in a properly rural area when strangers offer help without being asked - antisocial city dwellers please note. I explained to him that we were doing a vehicle survey for bats, showed him the equipment we use and we chatted for a while about bats and wildlife. Like most farmers he was highly aware of the wildlife around his farm. He described the bats he sees around his farmyard and invited me to drive through after the survey and take a look. Having a bit of time to spare later I drove through his farmyard and bats weren't all I saw. Perhaps he had intended to draw the curtains on the room that contained his cannabis-growing operation but was distracted by some livestock emergency...

Meeting the police during bat surveys is a fairly regular occurrence during surveys. If we are doing something liable to look suspicious I used to call the local station and let them know, to avoid wasting their time with an unnecessary visit. These days the local cop-shop is probably unmanned at night and I object to spending half an hour talking slowly to a disinterested call centre person who usually fails to advise the local patrol of our presence anyway. So explaining to bored coppers what we are doing is a regular thing.

Whilst carrying out a dawn survey close to an international airport I had a less run-of-the-mill encounter with some less run-of-the-mill police Officers. During the survey I heard shots fired in the near distance. "Bird scaring at the airport", I thought and carried on undaunted. A little while later, as I was leaving I saw a police car approaching at some speed. Apart from the everyday odd behaviour native to all bat workers I was probably looking especially suspicious. The site I was surveying was a building within a massive security fence. It was just a couple of hundred metres from the main runway of the airport, so just the sort of place your average terrorist might find alluring. And here I was, desperately trying to disguise the fact that I was placing the key to this high security compound under a brick beside the gate (my client's idea and not one I was in a hurry to take the credit for with the boys in blue).

The police car did a rather impressive screechy-wheel stop across the road, matched a moment later by another one. All very interesting...until machine-gun toting airport police leaped out, fanned round me and told me to keep my hands where they could see them. You never really know what you're going to do when placed in a dramatic situation, but my brain was whirling with three slightly worrying facts: these guys clearly mean business, in a moment they are going to ask me to explain my highly suspicious behaviour and my answer is going to involve furry flying animals...

It turned out that, whilst I may look suspicious, I don't look at all threatening (which was actually a bit disappointing). Apparently I had been right about the shots, but someone else had heard and reported them, giving Starsky and his mates an opportunity to go play. The really odd sequel was when, having finished with me, one of them asked me to wait as "the Chief Super wants a word with you". After a few minutes a much sleeker police car arrived and out climbed someone whose uniform had a lot more shiny bits on. This is where things took a surreal turn. It was 5am, I was utterly knackered, having been up since 1am and I had just been held at gunpoint. "They all think this is funny" he said, indicating the now grinning coppers "but I've just been appointed to take over the wildlife crime unit. Do you have time for a chat about wildlife crime priorities?" "Errr...ok". That was a very unusual morning.

On another occasion a police patrol stopped, to enquire if everything was ok, as our car, with an amber flashing beacon on the roof and reflective "surveying" sign on the back was stopped at a slewed angle in the middle of the A7 trunk road late at night. I really didn't have the nerve to tell them the truth: that we were looking for Noctule bats, which are quite rare in the Scottish Borders and I had piled on the brakes and leaped out of the car because we heard one. Not quite a Highway Code manoeuvre!

A couple of years ago I was asked to carry out bat surveys of a large number of primary schools in which it was planned to do extensive work so the local council needed to confirm that no bats were present (owing to their legal status as European Protected Species). The first stage of such surveys is usually a site visit, to check the buildings internally and externally for signs of bats and bat roosts. The schools were supposed to be advised when I was coming but, usually weren't. So, when I walked towards the entrance of one particular school I took a deep breath and steeled myself for the usual protracted explanation about bats, bat surveys, why one was necessary etc before being allowed past the Fort Knox security system that all schools seem to have.

To my surprise I was greeted with "Ooh bats, come in, come in!". "Wow", I thought. "This is unusual." I was ushered inside and pointed out to a passing teacher with "This gentleman has come about the bat." "Oh lovely!" was the response. By this point I was thinking something was a little odd. Not only were they unusually excited about a simple survey visit but they were talking about "the bat." Singular.

I was ushered up to a noticeboard covered in drawings of bats, paintings of bats, essays about bats etc. Alongside was a photograph of a Long-eared Bat and pages from the Bat Conservation Trust (BCT) and other bat-related websites. "I've died and landed in bat conservation heaven." I thought. The photograph was of a bat which had been found above the main entrance of the school the previous week. At first I was delighted. To see a school taking such a positive interest in bat conservation is unusual and fantastic. Bats suffer a great deal of prejudice and the best way to stamp out prejudice is to start with children. Then I thought about the bat.

The bat had been found in an exposed place on the outside wall of the school, within a few inches of an entrance used several times a day by a couple of hundred children. It apparently stayed there for two days before it "decided to leave". Whether this animal had been sick, injured or exhausted isn't clear but it certainly wouldn't have chosen to stay there for two days, being stared at by lots of people if it had an alternative option. I doubt very much that it "decided to leave". Perhaps it was eaten by a Magpie or other predator or perhaps it fell from the wall, to be picked up by a passing cat. Whatever happened could have been prevented, if someone had stopped to think "is this wild animal behaving naturally" and sought advice from BCT or the SSPCA. I suspect the kids who had researched the bat, drawn paintings of it and created a display about it would be rather upset if they learned that, whilst they were doing this, it was starving to death or being eaten. 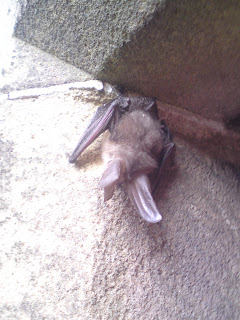 A photo of the school bat, taken by a parent and enthusiastically bluetoothed to me from her phone.


Annoyingly we did a load of night-time surveys in the hope of finding a roost on the premises and never found any evidence. Wherever it came from, it wasn't the school.


If you find a bat and need help, advice or information contact the BCT Bat Helpline: http://www.bats.org.uk/pages/help.html

If you find a strange human or inquisitive copper during a bat survey...you're on your own.