Goliath - the Daddy of harp traps

Working with bats can be a technical business, with bat detectors, recording equipment, passive monitoring equipment, traps, nets, kit for weighing and measuring etc. I am fairly practical and enjoy the challenge of building equipment where commercial solutions aren't available or if I feel they could be improved on.

One type of equipment I have worked on quite a bit is the harp trap, also known as  the Tuttle trap. In 2008 I built a fixed frame harp trap, for use at roost entrances, which proved to be a great success and since then it has been used regularly, safely catching many bats (see "The kitchen table harp trap", January 2008 and "Happy harp trapping", September 2008).

Since then I have turned my attention to methods of catching bats in free flight. Traditionally the two ways of achieving this are to use mist nets, in a very similar way to bird ringers or to use larger harp traps. As with most things in life, both techniques have drawbacks. Mist nets allow a much bigger catching area, are less likely to be identified by bats in flight and result in a better catch rate. However, the potential for distressing bats is greater than with harp traps. Avoiding this requires skill and experience, whereas harp traps are relatively easy to use and cause relatively little stress. On the other hand they tend to have a smaller catching area and are easier for bats to identify in flight, making the catch success rate lower.

I like a challenge and wondered if it might be possible to find a way of building a larger harp trap, which could give the size benefits of mist netting with greater ease of use. After all, the very first Tuttle trap (see picture), used to catch Mexican Free-tailed Bats was positively enormous A giant double/string trap seemed to be worth investigating. Enter the Goliath harp trap! 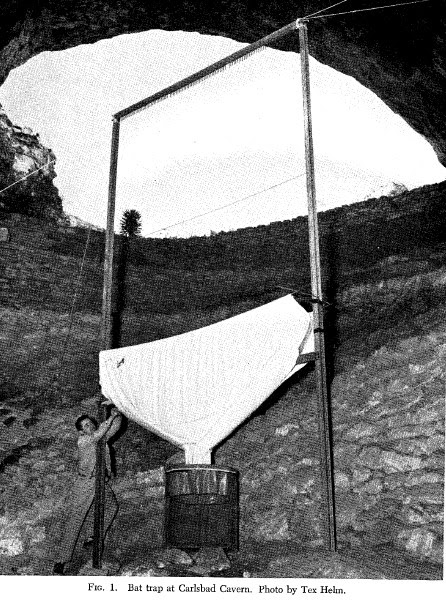 The original Tuttle or harp trap - a development on the earlier and simpler Constantine trap.

I dabbled with Goliath on and off for several years, trying various dead ends and attempting to resolve them. I wanted to build a harp trap 5 metres high, almost 1.5 times higher than any of the commercial traps. One key reason harp traps aren't normally this high is the problem of rolling up the strings when the trap is not in use. Anyone who uses commercially made harp traps will tell you this can be one a nightmare, with strings becoming entangled with one another and snapping regularly due to the stresses of being tightened and loosened frequently.

With my smaller roost-type harp trap the strings were permanently stretched onto a fixed frame. I recently broke a string for the first time (through carelessness), despite the trap having been used somewhere between 50 and 100 times over a period of six years. Would it be possible to build a 5m high fixed frame harp trap? I set out to find out! 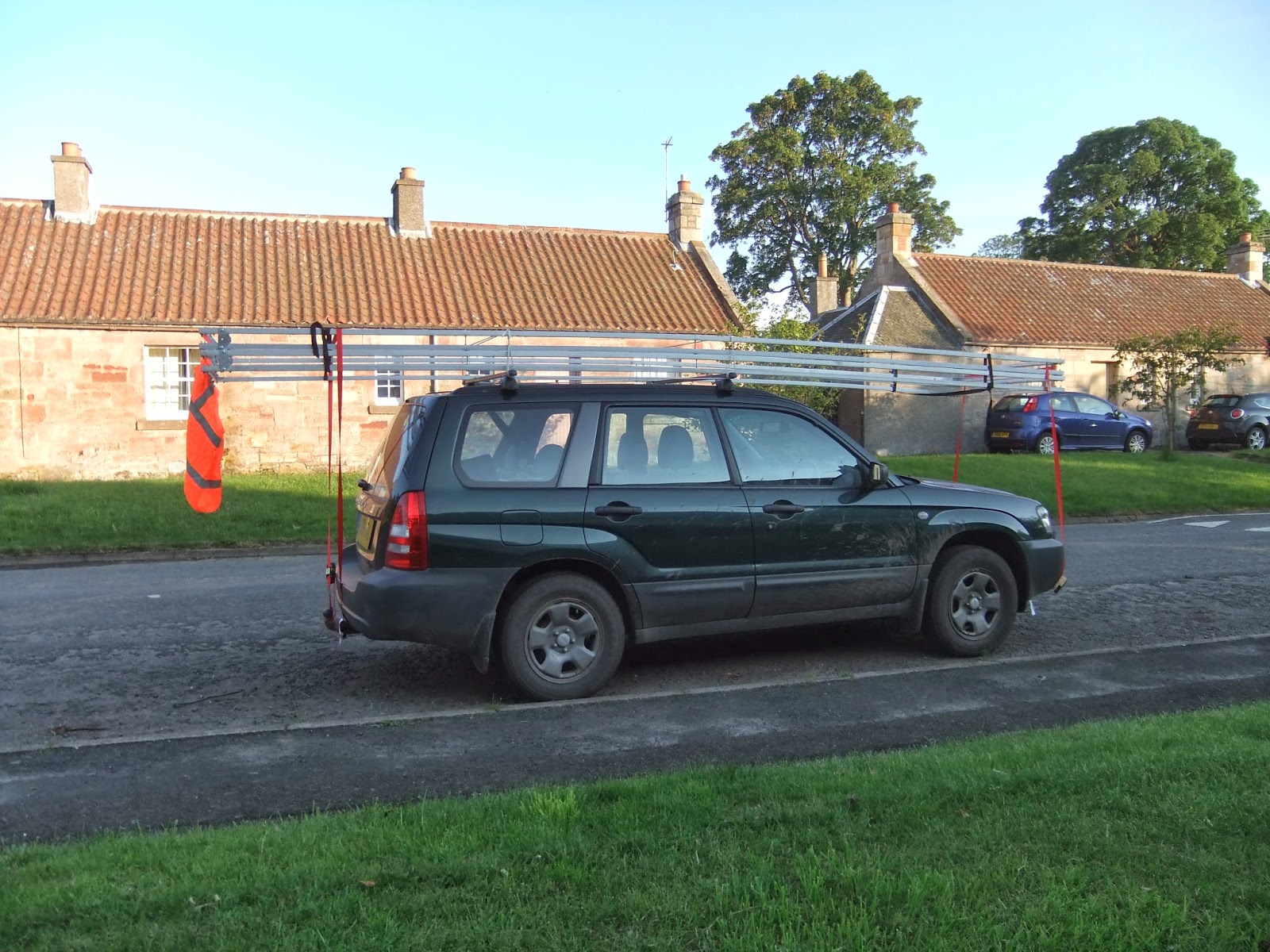 Goliath in place in the car roof-bars - a bit of a handful!

Using lightweight aluminium alloy as a frame made the prototype trap surprisingly easy for two people to carry, despite the size. A bigger issue was of course transport. I calculated that 5 metres was the maximum length that could be transported on the roof bars of my Subaru Forester (with tie-downs to the front and rear bumpers), but what about width? There's no point in having a very high trap if its so narrow that bats can simply fly round it! The trap needed to be sectional and I hoped to have two segments, each 1.3m  wide, which would plug together to give a total catch area of 2.6m x 5m. Sadly, when I strung the two sections (each of which were open-sided) I found that I had under-estimated the power exerted by a total of 520m of nylon monofilament line, pulled taught. Unsurprisingly the frames were pulled out of shape, but what I hadn't anticipated was that it was simply impossible to manually pull them square in order to connect the two halves of the trap! Back to the drawing board... 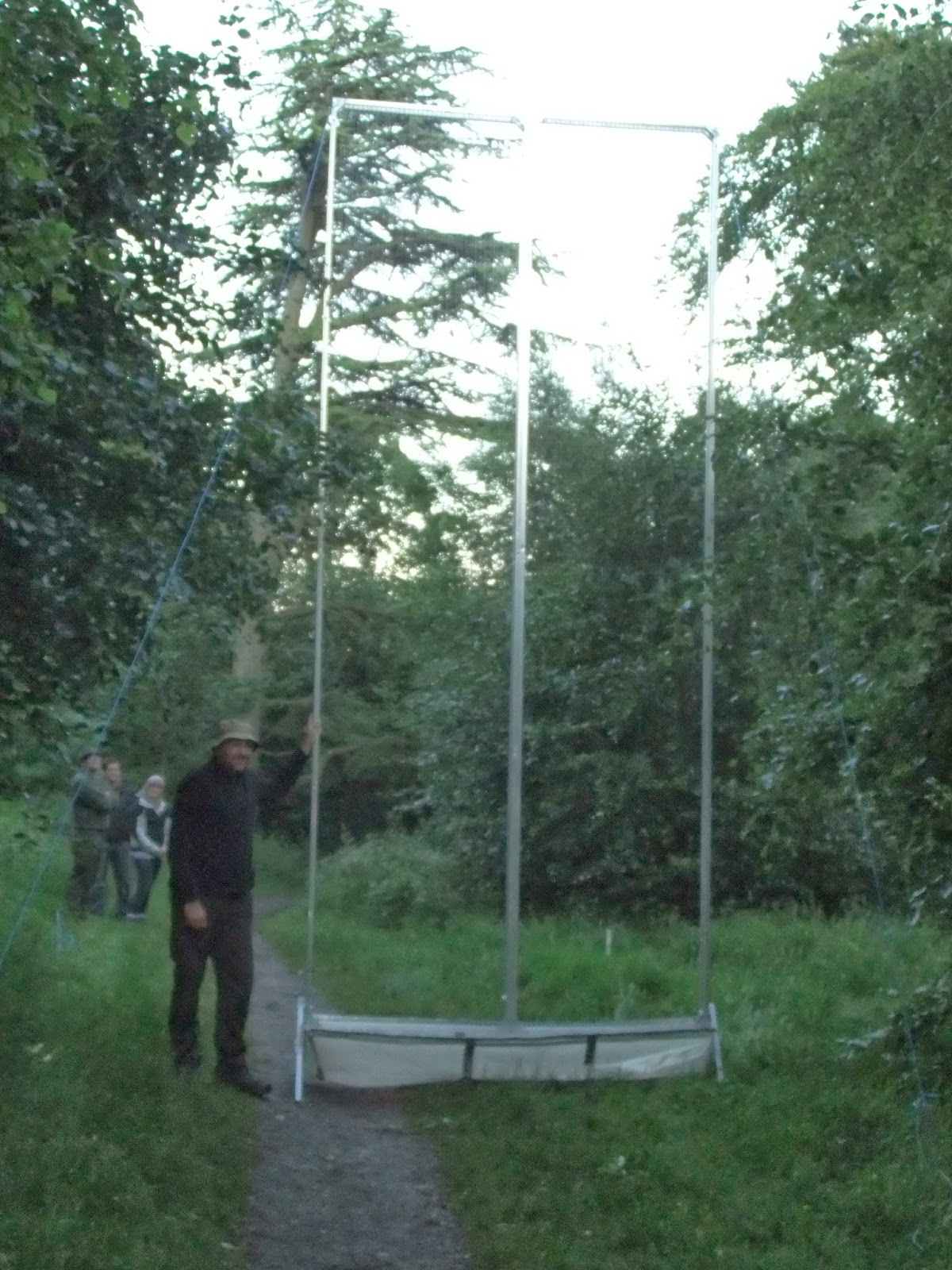 Goliath's first outing. The relatively narrow width and central pillar were unavoidable but reduced the effectiveness of the trap.

To allow the two halves of the trap to connect when strung there would need to be a central pillar. I wasn't happy about the impact this would have on the "visibility" of the trap to bats, but this appeared to be unavoidable. So the final Goliath prototype was effectively two traps side by side, each 5m tall and 1.3m wide. To facilitate raising and lowering of the trap the legs acted as pivots and the guys ropes (essential for stability) could be used to pull it up into position. A bag at the base completed the trap. I followed the successful bag design from the kitchen table harp trap, with the bag surrounding the trap on all sides, avoiding the drawstrings used on some commercial traps, as these often allow bats to escape.

In practice Goliath proved to be too unwieldy for regular use. It did catch bats, but required a team of 4-5 people to erect and there were problems with the strings being damaged in transit. It had been s useful test-bed, allowing me to try out some ideas, but after using it three times a year ago I decided to retire Goliath and start looking at a design for an especially large harp trap with rolled up strings. 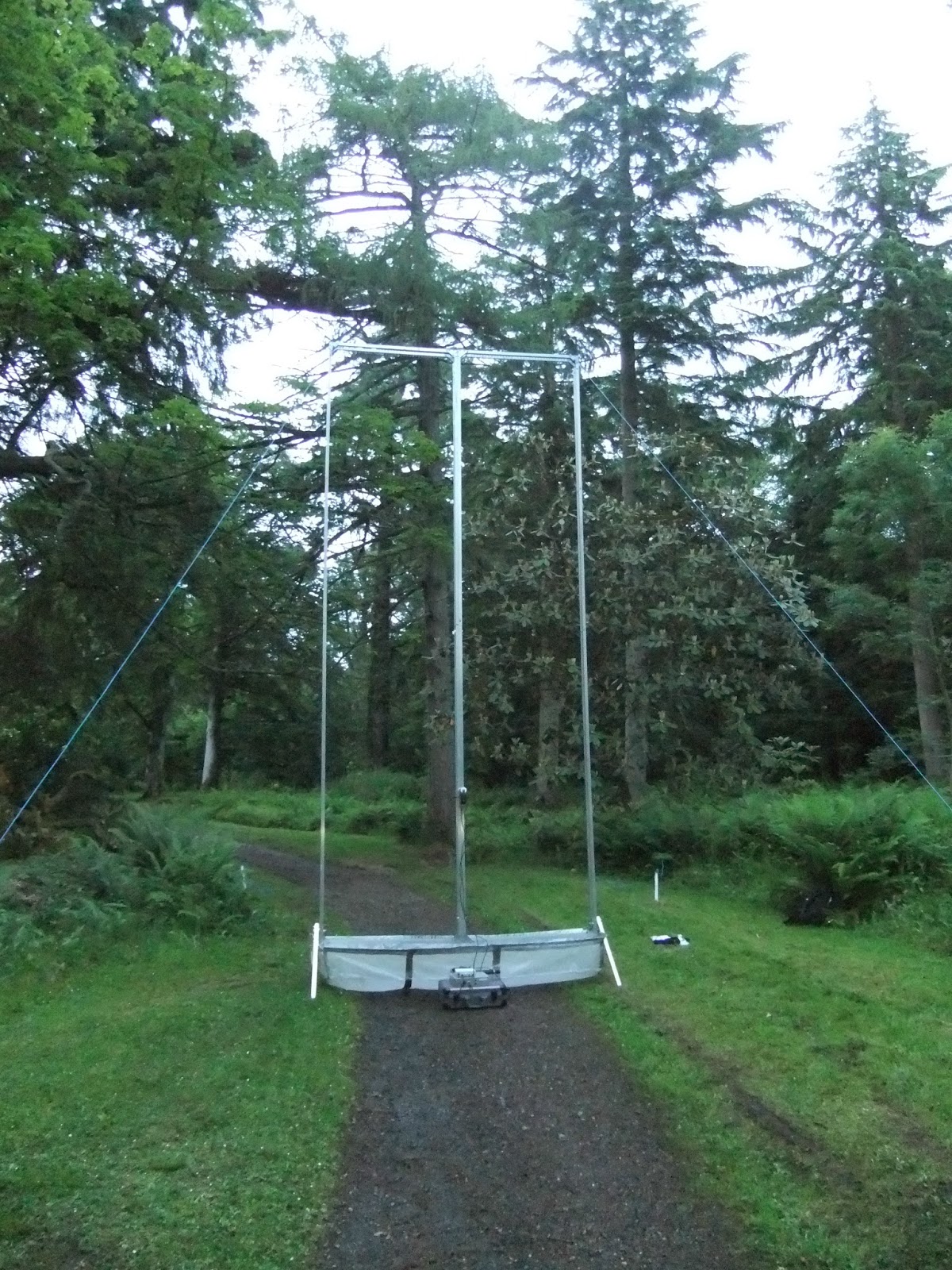 Goliath in use with an acoustic lure.

A year on and the intervening time has been put to good use: Goliath II is almost ready for use. When erected it will sit 2.5m wide by 3.8m high, giving a total catch area more than twice that of the commonly-used Austbat harp trap. I've included a number of interesting innovations, both to make it more effective than other roll-up harp traps and to make it relatively easy for others to replicate. I'll post about Goliath II once it has been tested, but it's looking promising. Watch this space!

Keep up to date with the latest posts Facebook.com/Davidsbatblog
Posted by David Dodds at 21:14