Over the years, one subject in this blog that has gained a lot of interest is the building and use of harp traps. Back in 2008 I described building a trap with permanently stretched strings, slightly smaller than the commercially available traps (see The kitchen table harp trap). Since then I've had more queries about that than about all the other posts I've written combined. 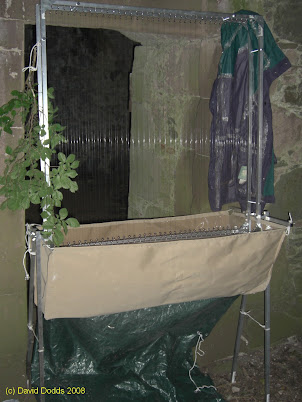 The ever-reliable 'Kitchen Table Harp Trap'
I've also written about several occasions when we put the kitchen table harp trap into use after building it. I'm happy to say that it has been a very successful trap and has caught many hundreds of bats for us. Well over a decade later, it is still in regular use and I have only ever had to replace a handful of strings.

I've written three posts about how it fared in practice:

In 2014 I started experimenting with larger harp traps, inspired by Merlin Tuttle's original harp trap and I described a massive one I built, using a similar technique to the kitchen table harp trap, but on a grand scale (Goliath - the Daddy of harp traps, March 2014).

Although Goliath was successful in catching bats, it had a couple of major draw-backs. When assembled, a post obstructed the centre of the trap. This wasn't part of the original design, but was necessary to resist the intense power of hundreds of strings hauling the top and bottom bars together. But a bigger issue was transport. As I built it with a light yet strong aluminium alloy frame, it was light enough to move about, but because of its size it had to be transported on a car roof rack, making the strings vulnerable to tree branches catching and ripping them in transit. Storage of the trap was a bit of a challenge too!

After a couple of seasons, I reluctantly decided that permanently stretched strings weren't really viable for such a gigantic trap. I went back to the drawing board and the eventual result was Goliath II. 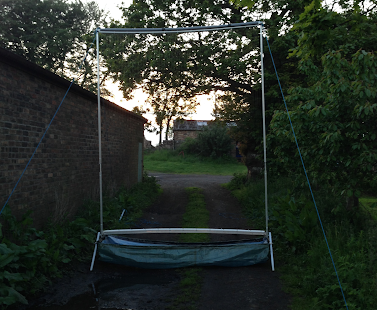 The Goliath II harp trap before I adjusted the height of the bag. The immense pull of hundreds of taut nylon lines causes the slight bow in the top and bottom beams.
For Goliath II I used many of the parts from Goliath, converting it to a roll-up harp-trap, similar to the commercially built ones, but noticeably bigger at nearly five metres high. The bag is fairly shallow and, after shredding my fingers whilst sewing the canvas and sheet plastic for the "Kitchen Table Harp Trap" bag, for Goliath II I wimped out and made a temporary bag out of lighter material, with seams closed with heavy duty tape. This has been so successful that I've never seen the need to update it. 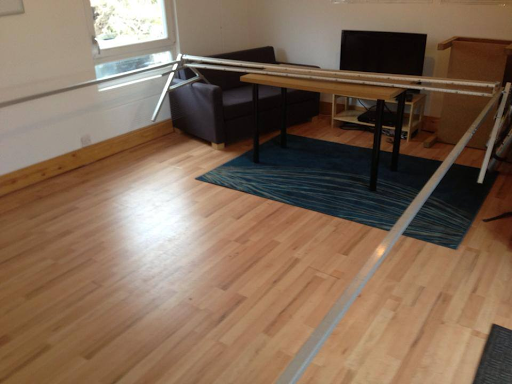 You get a sense of the size of Goliath II, when you see it indoors. I set it up inside so that I could stretch and tie the hundreds of nylon lines with fiddly double-grinner knots whilst they're under tension. Trust me - this job is best avoided.
A later addition was two arms to support the trap bag, lifting it so that the edges were above the bottom of the trap, after we'd lost a few bats through that gap. The bag sits just above the ground, different to most traps. This has the double benefit of making it less of a visible obstruction to bats in free flight than traps on longer legs and removes the need to block the space between the legs to prevent bats from flying under it. Occasionally we have also attached vertical arms to create a rubble net obstruction above the trap, to funnel higher-flying bats through it. 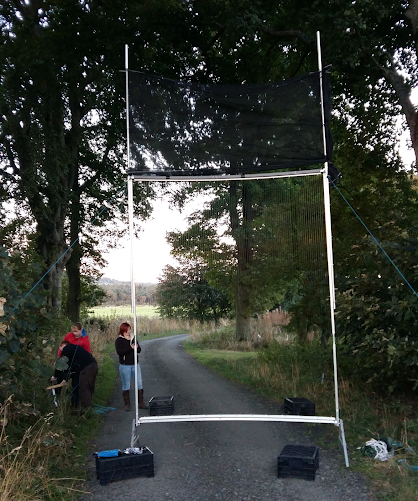 Goliath II, during erection, showing a mesh extension at the top.
There's a knack to rolling and unrolling a regular harp trap without catching or tangling any of the strings or getting them wrapped around the ends. Doing it with Goliath II is an even bigger challenge, but with practice it became easier. Trap strings have to be unrolled and kept under tension at the same time - letting them become loose is a recipe for chaos and damage. Once they're fully unrolled they are stretched to full height by adjusting telescoping poles at each side, aiming to get the strings to where they make that reassuring "plink" noise when you pluck them, showing that they're just right! 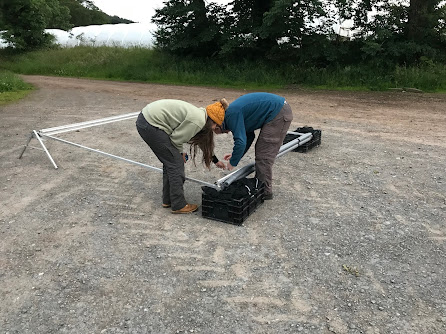 Putting the trap together in open space prior to tensioning. The triangular bipod on the left is one of two which rotate as we erect the trap, allowing it to rise, whilst keeping its feet on the ground.
Because of its height, the trap has to be held in place vertically by two angled guy-ropes, from the top corners to stout pegs in the ground. Raising it has a definite hint of Amish barn-raising about it (if you don't know what I mean, you really must watch the 1985 film "Witness"). It's relatively easily done by a team of four or five, but two people who know exactly what they're doing can manage, with the help of a couple of pulleys attached to the pegs. The four short legs stay on the ground, rotating around the base of the trap as it is pulled vertical with the guy-ropes. 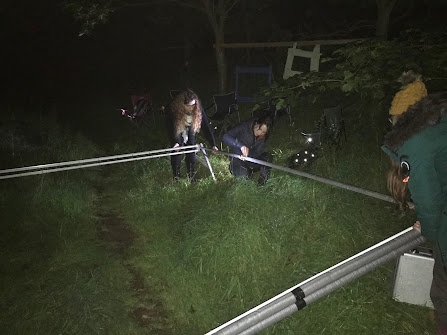 Doing the reverse procedure in the dark has its challenges. Here the tension is being released, prior to rolling up each side. 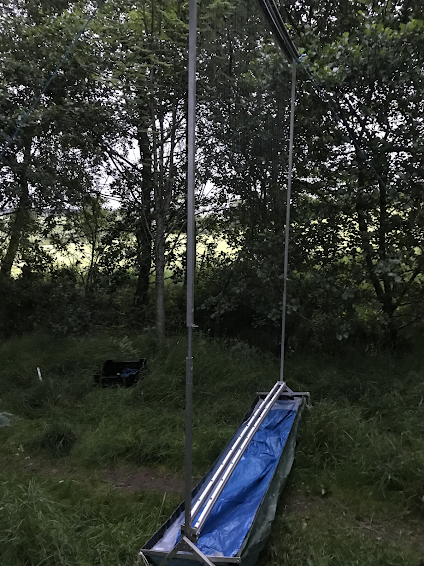 A side view of the trap fully extended and erected, though this picture doesn't show the arms, which were later added to lift the bag. 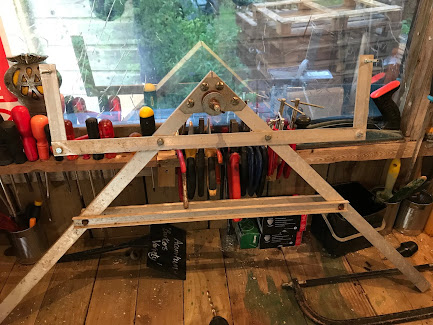 One of the leg bipods, showing the bearing which allows the trap to rotate into position and the arms, which were later added to support the bag.
The trap has been very successful over the years since I built it and has many captured bats to its credit. One of its first outings was to a Northumberland castle, where it was used to capture Daubenton's bats emerging from an open-ended cellar. The space was so large that we had to use rubble-netting to surround the trap, but it caught a substantial proportion of the merging bats, as well as several foraging Pipistrelles. Since then it's had many outings to catch bats in free flight, which is what it was really designed for. 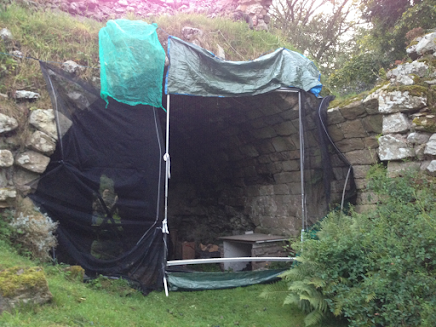 Goliath II, seeing service as an emergence trap at a Northumberland castle, surrounded by rubble-netting, to funnel bats into the trap. 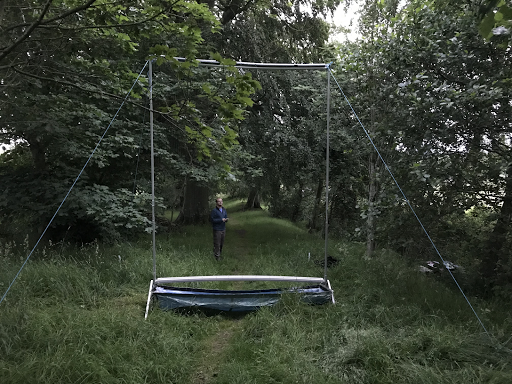 Here Goliath II is in use for its intended purpose - catching free-flying bats.
Like all bat-workers, I'm looking forward to returning (hopefully soon) to catching and handling bats within some of our research projects. I just hope that, after a year's absence, we can recall how to put Goliath II together. I'm sure we'll figure it out!
Keep coming back and soon I'll tell you about another addition to our stable of harp traps.
Keep up to date with the latest posts Facebook.com/Davidsbatblog