With increasing numbers of ecologists breaking free of the large employers and setting up on their own it’s worth exploring some of the challenges they will face. I recently wrote about some of those challenges (Setting up on your own - the ecology business) and I thought it would be worth considering a particularly thorny problem for many freelancers - it’s hard enough to find work, but getting clients  to cough up payment this side of hell freezing over can be a real challenge.
Cash-flow is everything in business. You can be massively busy and owed loads of money, but if it's all outstanding, you can't pay your bills and many small businesses are killed off by cash-flow problems. In my early days I had a torrid couple of months when I really struggled to pay bills, yet was owed about £40,000. 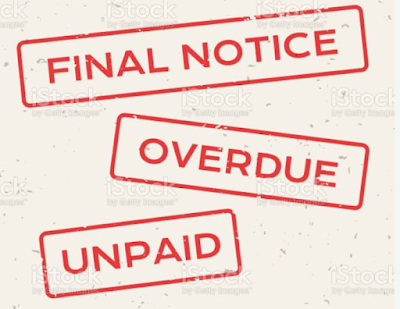 It seems straightforward enough, doesn't it? You do an honest piece of good quality ecology work, you send the client an invoice and within 28 days they send you payment. Simples! Oh, that it were so! There are people out there who firmly believe that your entitlement to be paid is correlated with the amount of effort you put into persuading them to pay. Much as I would love for them to be hit by lightning, it isn't going to happen, so we need some tactics.
In James Herriot's "All Creatures Great and Small" books James' boss, Siegfried Farnon deployed his "PNS" system, to persuade Dales farmers to pay up. P for polite, N for nasty and S for solicitors. From what I recall, it wasn't very effective, but the idea of gradually ramping up the pressure makes sense and works for me.
The first thing is to know your enemy. Who are you dealing with? Mrs Miggins, having an extension put up might just have lost your invoice in the heap of stuff on her kitchen table and a friendly, gentle reminder may well do the job. Most individuals and small businesses who play fast and loose can usually be brought to heel with a sharply-worded letter, threatening the small claims court. I also have a big rubber stamp with "PAYMENT OVERDUE", which works wonders, especially when used in red on the outside of the envelope, but be aware that this type of tactic may embarrass the client into paying, but may also make them reluctant to come back.
Mid-sized developers, or anyone else who also needs people to pay their bills to keep their cash-flow healthy are generally reasonable at paying up. The advantage of this size of business is that the person you dealt with might not be responsible for paying you, but they know who is and are able to apply influence on your behalf if you ask nicely.
The nightmare scenario for my business tends to be the massive organisations - the big PLCs, local authorities etc (though with some notable exceptions, who have discovered consciences). Many of these organisations now have a genuine policy of delaying payments for as long as possible, to bolster their own financial situation. 28 days? Three months is often as good as you'll get and much worse is common. One local authority we work for habitually pay after six months. Happily very few now play the "very slowly posted cheque" game, which tended to mean that payment took an extra 1-2 weeks to reach your bank account. Instead they appear to use two nefarious tactics.
One of these is for the accounts department to be virtually uncontactable. "We accept calls between 09:30 and 11:00 on Mondays and Thursdays" is not uncommon (they're invariably engaged). Emails of course don't get answered, making it virtually impossible to get hold of someone who can fix the problem, which is what they want.
The second tactic used is the "we need to set you up as a supplier" game, with increasingly loopy time-wasting requirements, dressed up as due diligence. Asking for insurance certificates is reasonable, but demanding a copy of your policy on Patagonian Narwhal protection seems to be the way they're heading. I maintain a large folder with PDFs of every possible thing they might ask for (there's about 40 documents in it and it's steadily growing). The ones who annoy me most get the whole damn lot as a massive zip file.
So how do you get past the financial Rottweilers whose job it is to avoid paying you? The first thing to understand is that they probably don't know the person who commissions work from you, are in a different office and probably a different county. So you can be (politely) aggressive, without fear of losing future work. The next thing is to accept that wearing them down is your best tactic - email them frequently, write to them often and when you have a spare five minutes, pick one or two to phone. The more you hassle them, the more you move up their payment list. I've also had a lot of success from hunting down someone very senior in the organisation (Google and LinkedIn are your friends) and contacting them direct, asking them to help. They are often appalled to discover that the money-wonks in the basement are treating people in this way.
Work out who the bad guys are and plan ahead. Add 10% to your fee bids for them, to cover the time you'll waste extracting payment. Make sure your terms and conditions include the right to charge interest on overdue payments. You could even ask for payment up front, but that's a great way to lose work.
There are companies out there who can help your cash flow by taking over your invoices and chasing them for you, paying you immediately. But this service comes at a cost. You might think it's worth it. I don't. A former accountant of ours suggested offering a 10% discount for invoices paid within seven days. Sadly, the only people who took us up on it were the ones who would have paid promptly anyway, so I don't recommend that!
Your final resort of course is the small claims court, which can be very effective, but it's time-consuming. It's also expensive, if the client turns out to be broke. I've only ever used it twice. In both cases they paid up before the case came to court, so now I threaten the court vigourously, deploying it's reputation, but not it's process.
If all else fails try showing up on the doorstep, especially if you have that wild-eyed "just back from a dawn survey and still got bat droppings in my hair" look. If that doesn't scare them into paying up, nothing will!
Keep up to date with the latest posts Facebook.com/Davidsbatblog
Posted by David Dodds at 16:08