Fifteen years ago, if you wanted to do passive monitoring of bats you had three options - the proven and dependable sandwich-box-shrouded Anabat SD1, with it's ZC recording system (seems clunky now, but was heaven-sent in those days of memory-deprivation and snail-like computers) or the Songmeter SM2 from the then new kids on the block, Wildlife Acoustics. Option three was to cobble up some kind of half-baked system with a basic detector plugged into a dictaphone and plenty of us dabbled with that sort of thing! Today  however, the marketplace is full of options and new models keep trickling onto the market.

Wildlife Acoustics recently launched the Songmeter Mini and I'll say more about that in another post, but there is a clear move towards lower-cost passive monitoring machines, possibly in response to the development of the incredibly low-cost Audiomoth. When you can buy a passive detector for thirty quid (extra for the polythene bag to hang it in!) then £1300 or more seems excessive. However, for professional work the Audiomoth seems an uncertain option, with too much geekery involved. Though that will probably change in time, it creates an opening for the manufacturers to slide in new mid-range passive detectors, drawing on their experience and reliability. 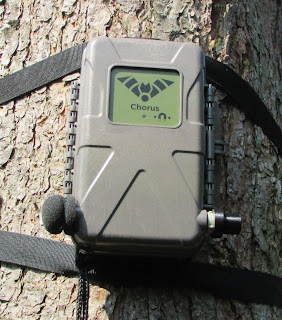 Andrew Dobson of Titley Scientific was kind enough to lend me a beta model of their forthcoming new machine, the Anabat Chorus. I've long been quite keen on Anabat equipment - it's not perfect (what is?), but Titley tend to listen carefully to customers and build on what they learn from each model. The Chorus is a good example. At first sight the case looks similar to the Swift and Express models, both of which are a pig to open, as the latches are incredibly tight - a necessity, to seal the case against moisture ingress. The solution is rather elegant - a large lever-type arrangement applies one of those first physics lessons we learned at school and makes opening and sealing the case much easier. There are also pierced flanges top and bottom, increasing the options for attaching the case to a substrate, especially useful for longer-term installations.

Inside the case, at first sight it seems similar to the Swift and has most of the functionality, but instead of the sexy (and costly) touch-screen, the screen is more basic, with up/down/left/right buttons. The battery case takes four AA batteries, but with Eneloops (the rechargeables of the gods), that should give many weeks of recording, in fact Titley claim 40 nights is possible. And they've retained the easily accessible back-up battery, so you can change it yourself when needed. As with most equipment nowadays, GPS is built-in, ensuring that that accurate sunset and sunset times can be depended on. There's also a temperature sensor, though personally, I rarely trust the data from in-built sensors. The detector is not always in the best location to get sensible data, so I tend to use a separate temperature datalogger in a shady spot nearby. 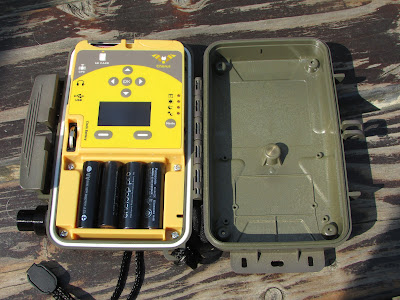 The interior of the machine and the controls - essentially a budget version of the Swift controls, but without losing anything vital that I could find 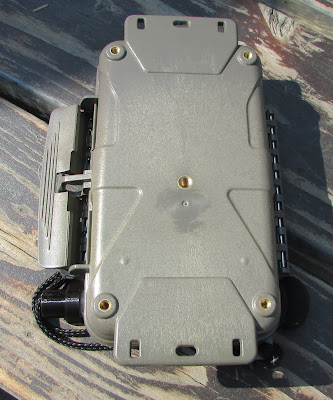 Rear view, showing the pierced mounting flanges and the lever arrangement, for opening the case with breaking a finger
In use, I found it to function exactly as expected, with similar funtionality to the Swift, using the control panel to select simpler timing options or a new software package to allow custom settings. As with the Swift, you can record ultrasound as .zc or.wav. There was a little distortion in the recordings, though this was probably due to reflections off the case. You can't use an extension lead with the microphone, as with the Swift, but Dean Thompson from Titley advises that there'll be an optional goose-neck extension to move it away from the case and reduce this effect. 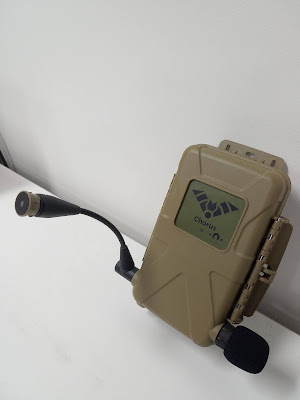 I'm happy to say that they have retained that wonderfully simple crowd-pleaser, the little magnet on a string. This allows you to check the machine is functioning properly once it's in position - rarely essential, but massively reassuring before you walk away, trusting that when you return in three weeks time the detector will have recorded as expected.

Considering that the Chorus will retail at £595 +VAT I was a bit bemused as to where the savings had been made, by comparison to the rather pricey Swift (currently £1194 + VAT from NHBS).  According to Dean, the main differences are:

What's this I hear you ask? "One of two microphones"? The Chorus has an acoustic microphone as well as an ultrasonic one, giving you the chance to record birds, frogs, crickets or whatever else takes your fancy (for £200 less you;ll be able to get one with just the acoustic mic). It has the same ultrasonic microphone element as the Swift (though they're not interchangeable).
One concern I have is that the microphones seem quite vulnerable, as they are attached to mouldings on the case. The Swift and Express come with excellent protective carry-cases, but apparently that won't be the case for the Swift, so I think a protective case to store and transport it will be an essential extra. 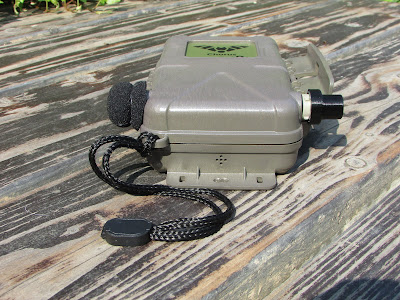 In this view you can see the two microphones, ultrasonic on the left, acoustic on the right.

Overall I was quite impressed with what we'll get for the price-point. I was also impressed that most of what has been removed to get the price down is unlikely to be missed much and that Titley have taken the opportunity to add some simple enhancements that improve the package. It's disappointing that the gooseneck microphone mount will be an additional cost over the basic price, but they are going to have Wildlife Acoustic's Songmeter Mini to compete with and I reckon that will be a fair fight.
The machine I was trying out was a beta model, so the final product may be slightly different. And if you want a seriously techie appraisal you'll need to look elsewhere - my musings here are for those of us who want to actually use the machine, rather than devour the specifications! But if that floats your boat you can find the full specification on Titley's website: Anabat Chorus
Keep up to date with the latest posts Facebook.com/Davidsbatblog
PS - the photos above show a foam sock on the ultrasonic mic, but it belongs on the acoustic mic (when I tested it, it was on the correct mic!)
Posted by David Dodds at 20:18